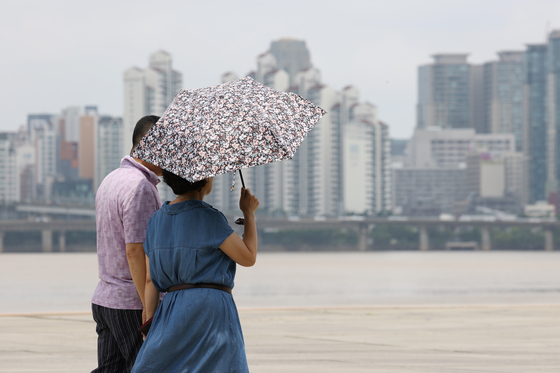 A woman carries a sun parasol in Yeouido Hangang Park, western Seoul, on Sunday, as the record-long monsoon season ends and a heat wave begins. [YONHAP]


The record-long rainy season that brought heavy downpours and caused casualties across Korea ended Sunday, to be immediately followed by a heat wave, the weather agency said.

After some rain in Gyeonggi and Gangwon early Sunday, the monsoonal front is forecast to move northward, according to the Korea Meteorological Administration (KMA).

This year's rainy season began June 24 and continued for 54 days in the central part of the country, marking the longest rainy season following a 49-day streak in 2013, the agency said.

The southern resort island of Jeju also experienced a record-long rainy season of 49 days, which ended July 28, and the southern areas also had 38 days of rain this summer, it added.

Between June 1 and Aug. 15, Korea received around 920 millimeters (36.2 inches) of rain, which is the second-largest amount since the weather authorities began compiling related data in 1973, according to the KMA.

The record was set in 2011, when about 970 millimeters of rain fell. The average precipitation during the cited period came to about 570 millimeters, the agency noted.

The recent downpours caused serious damage across the country, killing 37 and leaving five others missing. Some 8,196 have been displaced from their homes, with more than 2,300 still unable to return as of 9 p.m. Saturday, according to the Central Disaster and Safety Countermeasure Headquarters.

The weather agency also said that this year marked the first time the country did not experience a typhoon in July, while it saw an average of 4.3 typhoons over the past decade.

Though the rainy season officially ended, wet weather is expected to continue and there are chances of showers for parts of the central areas, according to the KMA.

A heat wave is also forecast to grip the country.

A heat wave warning was issued for Seoul at 11 a.m., as the daytime high is expected to reach above 33 degrees Celsius (91.4 degrees Fahrenheit), the KMA said. A heat advisory is in place for most of the country.