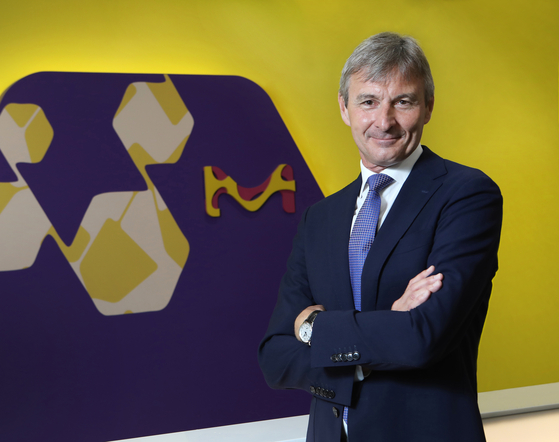 Merck Korea's Managing and Representative Director Glenn Young during an interview with the Korea JoongAng Daily at the company's Seoul office in Gangnam District, southern Seoul, on July 29. [PARK SANG-MOON]


Biopharmaceuticals are said to be Korea's next semiconductor, and the business has been the object of significant government support and no shortage of enthusiasm. It is hoped that it becomes a driver of the economy, much as chips have been for a number of decades.

Established in 1989, Merck Korea is a big supplier in terms of both chemical materials to display and semiconductor makers, like Samsung, LG Electronics and SK hynix, and of ingredients and equipment to biopharmaceutical companies. like Celltrion and Samsung Biologics. The company also frequently engages in research and development (R&D) collaborations and runs R&D centers in biologics and materials.

Korea is one of the few countries where the materials business is larger than life sciences for Merck. Elsewhere, the Darmstadt, Germany-based company is largely known as a global pharmaceutical company.

Appointed in 2017, Managing and Representative Director Glenn Young was the first regional head at Merck Korea to come from a life sciences background, instead of materials which was the case for all his predecessors.

“A bit later starting, but much faster,” Young says of Korea’s bio industry. “When I first arrived, it was and still is driven by the larger companies in Korea. But I see more move to support innovation and start-ups. I’m sure you’ll see many more start-ups coming out of universities which will give it more breadth [in the industry] rather than just being bigger companies.”

Below are edited excerpts of Young’s interview with the Korea JoongAng Daily on July 29.


Q. What significance does the Korean market have for Merck?

A. The Korean market for Merck is actually very important. Not only important in the context of Asia Pacific, but globally. And that comes from the fact that for a long time the materials business has had a large presence in Korea, of course driven by companies like Samsung and LG. But what’s happened more recently — let’s say over the last 10 years — is that the market for other areas of the businesses expanded a lot, particularly in life science research and then biological production.

So you’ve got the material business, which is still very important in Korea, and then you’ve got this rapidly growing life science area, which are the main drivers of our presence here.


Q. A lot of Korean offices for multinational firms serve as an operation for sales and marketing. Is there a role Merck Korea plays other than that?

A. The situation here is a real mixture because if you look at the way Korean customers [work], even their expectations — one feature of Korea is the amount of innovation that these companies are driving, the speed and the scale of investments. This is something for example back in Europe we don’t see. So we need to move as much as we can with their speed, which means we need to do a lot more locally more than just the sales marketing activity.

So if you go back to early 2000s, in 2002 we invested in facility for liquid crystal production and development. It’s not just the sales related collaboration, it’s an R&D collaboration of very deep level. So what we’re doing here, of course we do the sales and marketing activity, but we also have a lot of production and R&D activity as well.


Q. You’re the first managing director at Merck Korea from a life sciences background. Was Merck aware that bio pharmaceuticals would become all the rage at the time of your appointment?

A. Merck was certainly aware of the change, but my specific appointment is not directly related to that. But it is helpful that I have that background because I can understand what’s going on in that market. That development in the business has been going on for a number of years; we’ve seen growth in the demand for research-related products. And then as Korean biological manufacturers really set and started to scale up, we saw increasing demand for our bio processing materials because we make devices, materials for the production of biologicals.

So let’s say the peak of the real acceleration of that growth was in the last three years, but the trend had already started and we saw that coming. Also if you look at what’s happened in other countries of the world much earlier in the biologicals area, you see how that trend starts to develop, but it’s going much faster in Korea. It’s a bit later starting, but much faster.


Q. Throughout your career, you've worked as a business manager in life science in Europe and Japan. What are your impressions watching Korea’s bio industry growth in the past few years?

A. If I look back to what I experienced in the 1990s in the United Kingdom and Europe, this was kind of the blooming period in Europe but not so much a boom driven by big companies. It was a boom driven by start-ups; companies coming out of universities. And then of course some of those succeeded then became much larger or became part of bigger companies. In Korea, what you have is something that at the moment is much more driven by big companies. This innovation landscape is evolving, and I’m sure you’ll see many more start-ups coming out of universities, which will give it more breadth.

Companies worked in different areas, but the first focus was on biosimilars, contract manufacturing services. But now what comes after is fundamental R&D and innovation in their own products. That is also starting to go quickly. We see that development in the products for our research business.


Q. In the past year, there’s been a lot of significant events in Korea’s electronics industry: Japan tightened restrictions on key tech material exports to Korea in July 2019; the government thereafter launched a big initiative to localize supply of tech materials; and local panel makers increasingly making moves to shift from liquid crystal displays [LCD] to organic light-emitting diodes [OLED] panels for TV. How did these turns of events affect Merck Korea’s business?

A. The issue that came up with export controls with Japan — there was a lot of noise about it, and my first reaction was in a world where we need more collaboration between countries, it was very disappointing to see that. Nothing we made in Japan was affected directly by this export licensing process change. Our plan is to really be as close to our customers as possible. That means localization or regionalization of production is what we were doing anyway.

We’re very well placed in the OLED business, and that will certainly drive our future in displays. The announcement that came from Samsung to close LCD panel manufacturing for TVs in Korea came earlier than we expected. This drove a transition in the liquid crystal biz that was accelerated. That's a challenge — we have to adapt our organization to it. But fortunately because we invested in Versum Materials, we have the opportunity to balance between these businesses. It also provides opportunity for our people who can have the flexibility to move from the display business particularly in the liquid crystal area to either the OLED area or into the semiconductor material side.


Q. The Merck family controls 70 percent of the company. One thing I find interesting is that the company has been a family-owned business for more than 350 years and yet managed to survive in areas like pharmaceuticals and electronics materials, where innovation is key. From an employee perspective, how do you think this was possible?

A. Merck takes a very careful, well thought-out approach to governance. I'd say from an employee point of view, at first when you get to know the company, you start to understand much more about the structure. As you understand it, you see the value in that, in how a company can act much more longer term.


Q. Does this mean the family keeps distance with making direct business decisions?

A. It depends on what you regard as a direct business decision. An acquisition, for example, is conceived by the board of directors and in particular the CEO of performance material business, but needs the approval of the family because it’s a very significant change. But otherwise, the strategic planning process, the daily running of the business is done by the board.


Q. My impression on Korea’s family-owned conglomerates is that large-sized investment decisions are usually spearheaded by family members while for professional managers that stay in the position for a shorter term, making decisions of such size isn’t easy.

A. Maybe. But Merck has done this really successfully and has transformed the company over the last few years. It started 13, 14 years ago with Serono, then Millipore, Sigma-Aldrich [in life sciences] and Versum [in materials]. Of course the family has to give their vote, but it’s that business [office] that drives it.

I think because the objectives of the family are long-term, the family's expectation to the board is also to take a longer term view. Merck is a science and technology company and always has been. But science and technology in the markets we serve evolve very rapidly. It’s all driven by innovation and big global trends. So for Merck to survive, big decisions have to be made.

And if you look at the big decisions we made in the last 10 years, they’re really good ones. It’s providing stability, a balance — if one market is suffering due to whatever, the global pandemic, for example, then there’s normally another one that is doing better. Keeping this balance is very important.