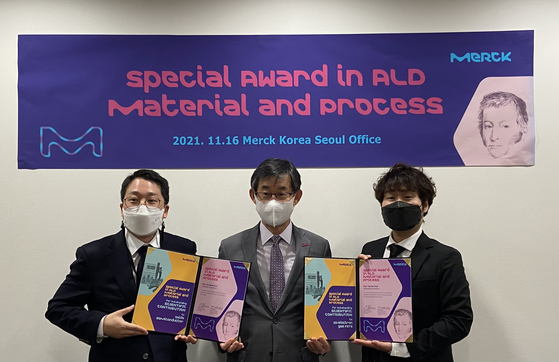 From left, Park Jin-seong, materials science and engineering professor at Hanyang University, Kim Woo-kyu, managing director of Merck Korea, and Park Tae-joo, materials science and chemical engineering at the university’s Erica campus, pose for a photo after the awarding of the Merck Special Award for contributions to the semiconductor and display industries. [MERCK KOREA]


Merck Korea announced Wednesday it has honored two Korean professors with the Merck Special Award for their contributions to the semiconductor and display industries.

Park Jin-seong was recognized for his research work on core materials for advanced atomic layer deposition (ALD) and chemical vapor deposition thin film applications, according to Merck Korea. His research is concentrated on finding materials which enable next generation IT devices, including transparent electrode materials for display devices and thin film encapsulation materials.

Park Tae-joo was recognized for his work in driving advances in ALD technology. Park’s work focuses on researching ALD processes and analysis for semiconductor devices, with particular attention on powder ALDs process for batteries.

“As Merck is celebrating its 32nd year in Korea, the electronics industry, which is led by displays and semiconductors, is advancing rapidly around the globe due to the growing demands for digital devices and technologies,” Kim Woo-kyu, managing director of Merck Korea. said. “Going forward, Merck will continue to deliver scientific progress in business and beyond, including in new fields such as healthcare and life science.”