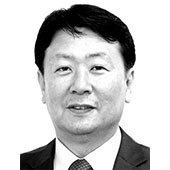 Although it was not largely reported by Korean media, foreign media recently made a big deal out of the possibility that the Moon Jae-in administration will shut down broadcasts to North Korea. On Aug. 11, a reporter from a foreign media outlet asked an official from the Unification Ministry if Seoul would impose a ban on the radio broadcasts targeting North Korea if Pyongyang complains about it — just as Seoul banned the distribution of leaflets.

“I can neither confirm nor deny,” the official replied. “We must consider the value and interest of other people in Korean society as much as the freedom of expression of North Korean human rights groups and promoting rights in the North.”

Global human rights groups such as Human Rights Watch, as well as the U.S. State Department all criticized the South Korean government. They said they will increase the North Korean people’s access to independent information from outside. The Unification Ministry tried to calm the situation by saying it did not consider a ban on broadcasting. But the Moon administration’s true intention was already revealed.

Moon’s Korean Peninsula peace process is similar to the Sunshine Policy of the late President Kim Dae-jung. Moon, in fact, vowed to uphold Kim’s North Korea policy when he attended a memorial ceremony for the late president in August 2017. Because the late President Roh Moo-hyun also promoted a similar engagement policy during his term, Moon’s North Korea policy is a version 3.0 of the Sunshine Policy. 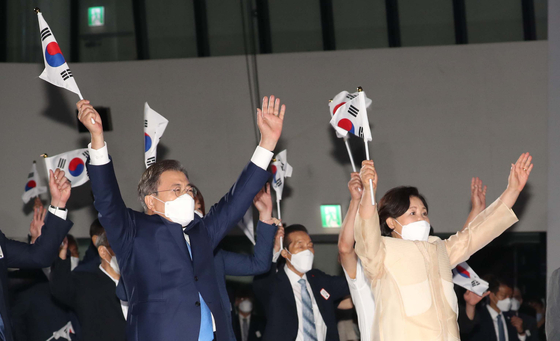 In a ceremony on Aug. 15 to mark the 75th year of Korea’s liberation from Japanese colonial rule, President Moon Jae-in and his wife raise flags. He emphasized the importance of establishing a permanent peace system with North Korea. [JOINT PRESS CORPS]

Basing its fundamentals on Ostpolitik of West Germany, the Sunshine Policy had its own complete logic — whether you liked it or not. The concept followed the “change through rapprochement” policy of Egon Bahr, the architect of German unity. Kim Dae-jung wanted to expand exchanges and change the people of North Korea to create a foundation for unification.

Whether it is East Germany or North Korea, information from the outside is the most crucial tool to change a rigid communist society. The residents will have a strong desire to change only after they realize the flaws of their communist dictatorship. Many experts, therefore, assessed that the biggest factor in East Germany’s collapse in 1989 was the people’s free access to West German broadcasts.

East Germany did not block West German broadcasts for various reasons. It was easy for people to access the broadcasts with simple devices, but the western world also worked hard. After the mood of détente in the early 1970s, the Eastern and Western blocs in Europe signed the historic Helsinki Accords to end the Cold War. The Western bloc made tireless efforts to include freedom of information in the accords, along with human rights protection. East Germany, a member of the accords, had to allow the Western broadcasts. To this end, Germany was unified through radio waves every evening, as political scientist Kurt Hesse once said.

Whether it is the democratization of North Korea or a peaceful unification, the Moon administration must change the North to see an outcome in its policy. Offering fresh outside information is a key factor. If the government only offer assistance to North Korea in the name of exchanges, it will prolong the North Korean dictatorship, in consideration that a possibility of shutting down broadcasts to the North is a bad decision.

According to a recent survey, over 30 percent of North Korean residents are listening to Voice of America (VOA), Radio Free Asia (RFA) and radio broadcasts by the Unification Media Group, which is operated in western Seoul. Furthermore, many defectors decide to escape North Korea after listening to the broadcasts.

During his trip to Northern Europe in June 2019, Moon made repeated mentions of the Helsinki Accords in a visit to Finland. He stressed that the accords gave many lessons to the Korean Peninsula. But he missed the key point. When outside information freely goes into the North, the two Koreas will be united peacefully. The Moon administration is going the opposite way. If it submits to Pyongyang’s demands and stops the broadcasts, its engagement policy will be questioned seriously.