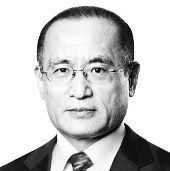 
The Moon Jae-in administration has one year left. It has not earned very good scores for diplomacy. Despite its many endeavors, practically no progress has been made on peace on the Korean Peninsula primarily because of two reasons. First, the liberal administration is engrossed with achieving peace on the peninsula separate from the bigger frames of power dynamics: the U.S.-China rivalry and the Korea-U.S. alliance. Second, the Moon administration started its own Korean Peninsula Peace Initiative based on ideology without adapting it to ever-changing realities.

Let’s start with the first reason. Since the end of the Cold War, a realignment of power has been going on in Asia, as clearly seen in the replacement of the Soviet Union in the region by China. After China’s dramatic rise, the United States is keeping a close check on China. The Sino-U.S. contest has created an external environment as comprehensive and overwhelming as the Cold War between the U.S. and the USSR.

America and China are competing to attract countries into multilateral frameworks led by them. China is pushing the establishments of the Asian Infrastructure Investment Bank (AIIB), Belt and Road Initiative and the Regional Comprehensive Economic Partnership (RCEP). The United States came up with its Indo-Pacific Strategy, the Quadrilateral Security Dialogue (Quad) and a multipartite coalition to confront China’s challenges on the high tech and infrastructure fronts.

Other countries are striving to react to the shifts wisely. South Korea is one of the few that has tried to bury its head in the sand. The country shunned global initiatives led by the U.S. while actively participating in the China-led AIIB and RCEP.

South Korea cited the “lack of an official request” from the U.S. to run away from its initiatives, the same tack Seoul took when Washington wanted to deploy the Thaad missile defense system in South Korea. The Park Geun-hye administration took that step based on “three no’s” — no request, no review and no decision — as if they were appropriate measures. Over the U.S-led Indo-Pacific Strategy and Quad, the Moon administration said there was no official requests from the United States. Such cowardice seems to be a part of the intrinsic nature of South Korea’s diplomacy. Even after an enemy starts assaulting the country, its government would say, “We will not review or make a decision as we have not been notified of the attack.” As that kind of attitude will inevitably lead to serious schisms in the alliance, it can hardly resolve the Korean peninsula issues.

Now let’s go back to the second reason. An ideological approach to peninsular issues is another outstanding feature of Korea’s diplomacy. Examples are plenty: the Lee Myung-bak administration’s initiative of denuclearizing North Korea, achieving peace and helping North Korea reach the $3,000 per capita income and the Park Geun-hye administration’s Korean Peninsula Trust Process, unification as a “jackpot,” and the Northeast Asia Peace and Cooperation Initiative. Though some were just campaign promises — and mostly not supported by other countries, including North Korea — the conservative governments pressed ahead with them as if they were holy script. Looking back, such flowery slogans sound like very unfunny jokes.

The liberal Moon administration came up with the Korean Peninsula Peace Process and has been carrying it around like a dead albatross. Even after Joe Biden replaced Donald Trump as the commander in chief across the Pacific, the government steadfastly adheres to its North Korea policy from 2018. If this critical gap persists, the Moon administration’s policy will likely follow in the footsteps of the failed Park administration’s.

Moon is to meet with Biden in the White House soon. Unless their discussion goes smoothly, South Korea can hardly reap any diplomatic gains, particularly given all the concerns in the past. So I would make some timely suggestions.

To make a meaningful turnaround in the final year of Moon’s presidency, his administration must create an atmosphere for a successful summit by finding effective ways to respond to the U.S.-China rivalry. If the Moon administration chooses to fuel U.S. disappointment at Seoul by taking an ambiguous position between the two powers and presses on with its peace offensives toward North Korea, it will get absolutely nowhere.

Second, South Korea must readjust its strategy on North Korea to reflect a changed reality. After Trump vanished from the stage, Biden emerged as the protagonist. After wrapping up his own North Korea policy, Biden will come up with a script different from that of the Trump era. The Moon administration must adjust its own script correspondingly instead of sticking with a script it used four years ago. The government must not insist that its demands have been reflected in Biden’s playbook, either.

Third, South Korea must be prepared for a worst case scenario resulting from an unexpected provocation by Pyongyang. The Moon administration makes it taboo to talk about such a possibility, but that very attitude is based on a deep-rooted ideology it can’t shake. It is also manifestly irresponsible.

Another military provocation from across the border will exacerbate the atmosphere in the international community. Unless it is fully prepared for any contingency, South Korea will likely be swept away in a tsunami. If the Moon administration opts to go against the tide and stick to its script from 2018, it will be further isolated from the rest of the world. Whatever the case, the government will be left with almost nothing to do when Moon’s audacious Korean Peninsula Peace Process falls to pieces.

The Moon-Biden summit slated for May 21 in Washington will help determine the fate of Moon’s North Korea policy. He must prove that a government launched with massive candlelight vigils is different from past administrations.