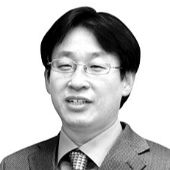 There is a small park between Lotte World Mall and the 123-story Lotte World Tower in Jamsil, southern Seoul. At one corner of the plaza stands a 5-meter (16.4 feet) statue of German writer and statesman Johann Wolfgang von Goethe (1749-1832). The sculpture is a copycat of the 1990 outdoor memorial of Germany’s literary prize by sculptor Fritz Schaper, located in the Tiergarten District of Berlin.

Why is Goethe’s statue located between the two Lotte buildings? Young man Shin Kyuk-ho (1922-2020) from Joseon, then a colony of Japan, arrived in Tokyo in 1942 with only 83 yen ($0.79) in his hands. He sold handmade soaps and hair cream and set up a chewing gum-making company in Tokyo under the name Lotte in 1948.

The name Lotte was borrowed from the nickname for Charlotte Buff, the sweetheart of Goethe and the heroine of his masterpiece, “The Sorrows of Young Werther.” As if to borrow Werther’s passionate devotion to Charlotte, Shin, once an avid literary student, devotedly committed himself to his company. “If there is passion, any hardship can be happily overcome,” he used to say. It had been his dream to erect the tallest high-rise in Seoul. The gigantic project pursued from 1998 was stalled by various setbacks, but was finally completed in 2017. The humble gum company Lotte was the beginning of his passion.

Chung Ju-yung (1915-2001), founder of Hyundai Group, visited a Greek shipping behemoth even before the first dockyard of Hyundai Heavy Industries was completed. He took only a map and photo of the vast beach in the southern port city of Ulsan where his dockyard would be located. George Livanos, the tycoon of the shipping company Sun Enterprises, liked the Asian businessman’s boldness and made two orders for oil tankers. The shipper later asked the delivery to be made three months ahead of the schedule. Managers protested. But Chung did not waver. “Have you tried it?” he said. In the end, the two 260,000-ton ships were built and delivered at the shortest-ever period shortly after the completion of the first dock.

In his memoir titled “Have You Tried It?,” Chung recalled that an optimist can find an undiscovered path while a pessimist cannot see one already there. He has made numerous records and first cases for Korean enterprises.

Samsung Group founder Lee Byung-chul (1910-1987) summoned his third son Lee Kun-hee after he ascended to vice chairman in 1979. Lee, the founder who enjoyed calligraphy as a pastime, wrote “Be All Ears” in Chinese charecters and gave it to the son. He also gave the same advice to his youngest daughter Myung-hee who became responsible for Shinsegae Department Store at the age of 36.

“Listen even to the voice of a child,” he said. Lee’s opening words in meetings with presidents of Samsung companies had been “Let’s hear you talk.” Another favorite saying of his was, “To earn a person, you must read his mind.” To do this, “listen intently,” he used to add. “Be all ears” became a family maxim that was handed down over the three generations in the Lee family. It is how Samsung started out as a rice mill in Masan, South Gyeongsang, to become a global leader in electronics and chipmaking today.

Prudence and boldness were not the sole common features of the founders of Korean household corporate names. Their legends were sustained through symbiotic growth in society. “It is not easy to build a business. But it is much more difficult to sustain it,” the founder of Samsung Group said.

Their endeavors together with the blood and sweat of the people helped Korea ascend. The national rank, however, has become under challenge.

The government and ruling party have been reckless in real estate policy. They are also heedless in trotting out anti-business regulations. They shrug off market concerns. They snub anyone who is not on their side. The wealth disparities worsen from skyrocketing housing prices and a deepening economic slowdown. People have become weary and fatigued.

Speedy reckless driving can end in an accident. Even if it takes time, a society must go down the path together in dialogue and cooperation. To do so, policymakers must pay heed. That’s what this country demands from policymakers today.