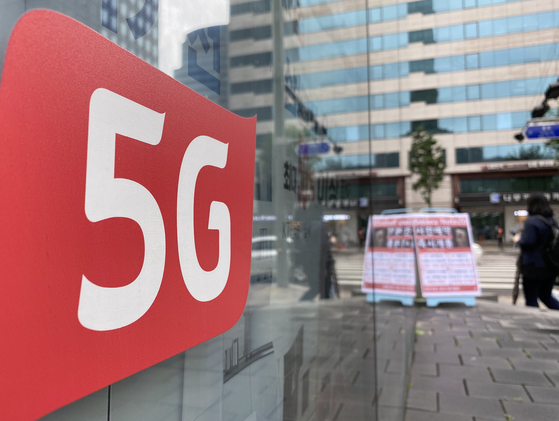 A citizen walks past a phone shop in central Seoul on Aug. 5. [YONAHP]


It’s been over a year since 5G service was commercialized in Korea, and while the number of 5G users reached 6.88 million in May, they're not entirely happy.

Kim, who bought a 5G smartphone last September, recently realized that his residence is not covered by 5G.

Kim asked for a refund, saying he should have been told about 5G coverage gaps when he purchased the device.

His mobile carrier pointed out the fine print in his contract, which warned him of the problem.

Kim remembered checking some boxes on the contract as instructed by the sales agent and then signing it.

According to a survey conducted by the Korea Consumer Agency on 800 5G networks users in May, 52.9 percent said “low speed” was the biggest inconvenience. A full 49.6 percent said “limited coverage” was another problem. (Respondents were allowed to make more than one answer.)

Among the 800 respondents, 500 happened to be living in 5G coverage areas. Three hundred are not.

Forty-eight percent of respondents said the biggest disadvantage of 5G service was its steep price tag, while 41.6 percent complained that their 5G devices automatically switch to 4G LTE connections more often than they anticipated — calling into question the whole point of upgrading to 5G.

Surprisingly, 26.8 percent said they were not warned about incomplete 5G network coverage when they purchased devices. Among this group, 44 percent found that they resided outside the coverage areas. 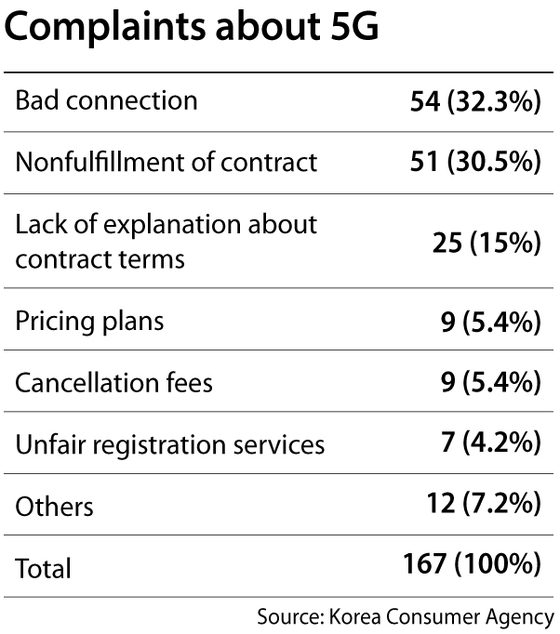 According to the Korea Consumer Agency, of 167 complaints it received from 5G users between April 2019 and March 2020, 32.3 percent complained about bad connection. “Lack of explanation of contract terms” accounted for another 15 percent.

Lack of information is not the end of it. None of the phone companies allow people who own 5G devices to choose 4G LTE pricing plans, which are cheaper. In other words, although a person knows that he lives outside a 5G network, he has no choice but to go with the expensive pricing plan as long as he wants to own a 5G smartphone.

However, the Science Ministry announced Thursday that devices purchased through phone makers' official websites or e-commerce sites — not through mobile carriers — can be used with 4G LTE plans if owners want.

The Korea Consumer Agency on Wednesday urged mobile carriers to improve their explanations of 5G network coverage to potential customers. It also asked carriers to diversify their pricing plans, as well as allow all 5G device users to choose 4G LTE pricing plans.