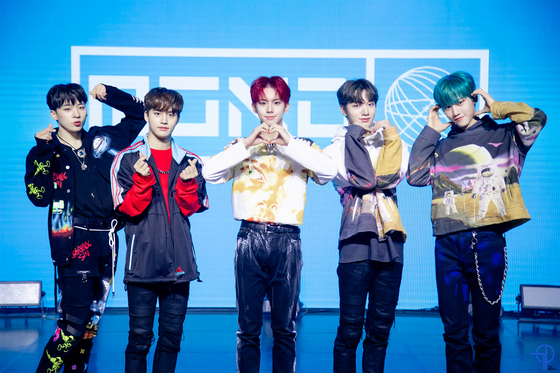 
Rookie boy band MCND releases its new EP "Earth Age" on Thursday, four months after its single "Spring" and six months since its debut release "into the ICE AGE" in February.

"Earth Age" revolves around the story of five boys — the members of MCND — who arrive on Earth from an extraterrestrial planet called "Kepler-1649c" and perform for the people of Earth.

The dance pop lead track "nanana" is about the band's will to stand strong against anything and everything and features energetic choreography.

"We as MCND take our performances very seriously, and we think that we have matured since our debut," the band said in a press release on Thursday.

"We think that having upgraded, we can show our energy better to people."

MCND has been gaining popularity especially among foreign fans, and recorded 155,000 followers on international music streaming service Spotify — which is the highest for any band that debuted during the first half of 2020.

MCND was awarded the Rookie of the Year Award at the 2020 Soribada Awards on Aug. 13.