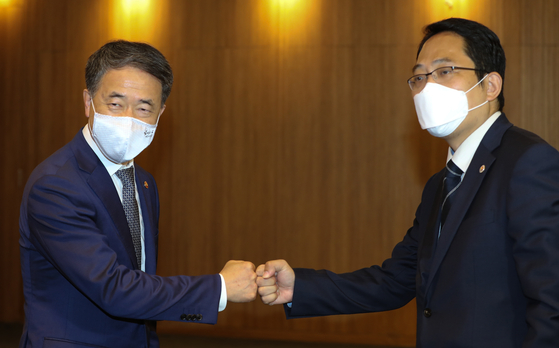 A nationwide doctors' strike is expected to take place next week as planned after the government and the Korea Medical Association (KMA) were unable to reach a consensus on a proposal to increase medical students' admissions quota.

Health Minister Park Neung-hoo and Choi Dae-zip, president of the KMA, led a two-hour meeting Wednesday afternoon at the Koreana Hotel in central Seoul to try to tackle their differences but ultimately failed. The KMA first requested the talks.

The KMA announced it will carry out a second general strike from Aug. 26 to 28 despite worries over the recent spike in coronavirus cases in the country.

“If doctors follow through on the walkout amid such a serious situation, the government will have to take necessary actions in accordance with the law and existing rules,” Vice Health Minister Kim Gang-lip said in a briefing Thursday.

He urged the KMA and the Korean Intern Resident Association to halt their walkouts.

“No matter what the circumstances, the health and lives of the people should not be threatened,” Kim said.

Doctors have been protesting the government’s announcement last month that it plans to raise the medical school admissions quota by 4,000 students over the next decade from 2022 to 2031, in increments of 400 students annually.

According to a plan reached by the government and ruling Democratic Party (DP), some 3,000 of these new doctors will be required to practice outside the Seoul metropolitan area in a move to make medical services more accessible in rural regions. The other 1,000 doctors will be required to specialize in fields such as epidemiology, trauma and biomedical research, less popular mainly due to their heavy workload and comparatively low paycheck.

Admissions to medical schools have been capped at 3,058 students annually since 2006. The admissions quota will revert to this figure starting 2032.

A spokesman for the Ministry of Health and Welfare said after the meeting that the KMA had requested to withdraw plans to increase the medical student admissions quota and to establish a public medical school, and that the two sides “were not able to narrow the differences.”

Likewise, the KMA in a statement said, “Despite two hours of discussions, the two sides were only able to confirm the differences in our positions.”

It went onto express “regret” that despite welcoming talks, the government insisted that it was not able to do away with the policies.

Trainee doctors will begin their walkout Friday for an unspecified period as planned, and the second nationwide doctor’s strike will kick off Wednesday.

“We regret not being able to alleviate the anxiety felt by the patients and the regular people who have been expecting some sort of agreement to be reached between the government and the doctors,” the KMA statement said.