Bluefangs head coach Ko would like you to call him Jason

Bluefangs head coach Ko would like you to call him Jason 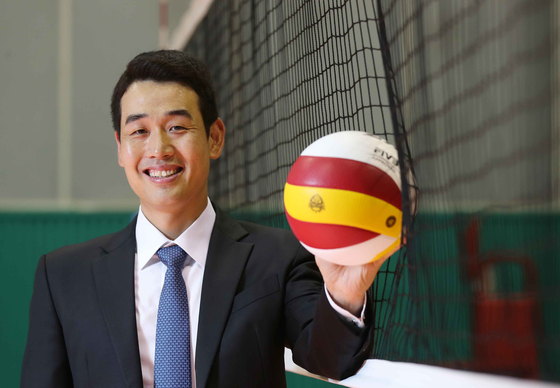 The Daejeon Samsung Fire & Marine Insurance Bluefangs head coach Ko Hui-jin is the youngest head coach in the league, at 40. As a young head coach, he hopes to give his players more freedom so they can have more horizontal relationships. [KIM SANG-SEON]


Step on to the Daejeon Samsung Fire & Marine Insurance Bluefangs' training court and you'd be forgiven for thinking you'd stepped outside of Korea.

Newly appointed head coach Ko Hui-jin prowls the sidelines of the court, calling out names like Max, Tom and Shawn. Ko doesn't have a team of foreign players — instead he's given his young players English names to encourage the team to be more informal and speed up communication.

This idea didn’t come out of nowhere. Ko, who at 40 years old is the youngest manager in the Korea Volleyball Federation (KOVO), drew on his own experience back when he played for the Bluefangs with foreign player Leonardo Leyva Martinez, better known as Leo.

“Leo had a hard time with Korean names,” Ko said. “To make it easier, I chose an English name. Rather than Hui-jin, Jason was short and more comfortable.”

“I told our players to call me ‘Jason’ rather than head coach,” Ko said. “There were players that had a hard time, but since they’re young, they adjusted quickly.”

Since he retired in 2016, the Bluefangs have never once won the championship. The team slowly lost their status as the elite, dominant team in the KOVO.

The 2019-20 season might have ended early due to the coronavirus, but the Bluefangs were already clearly not having a great year, finishing fifth out of seven clubs with a record of 13 wins and 19 losses, totaling 41 points throughout 32 matches.

Ko never really left the club. After his retirement he immediately returned to the Bluefangs as a coach. He’s been a one-club man who has played and coached for the Bluefangs for 18 years.

Once the 2019-20 season ended, the Bluefangs went through several meetings to try and find their new head coach. Although there were other candidates, in the end, they appointed Ko, apparently worried that if they didn't, he might finally leave the club.


“Coach may not feel as much responsibility as head coach, but they still have some responsibility for the team’s performance,” Ko said. “[When the season ended,] I had two different thoughts. I thought about whether I will be able to fulfill my role if I become head coach. It would be great if I was appointed as head coach, but if that wasn’t the case, then I would have to leave the team to make room for the new head coach. Those were my thoughts.”

As a result, the Bluefangs appointed Ko as the fourth head coach in the club’s history. Ko is the youngest head coach ever in the KOVO and the first to be born in the 1980s.


“I’ll work hard to not disappoint the people who have trusted me,” Ko said.

Years before Ko took the helm, the Bluefangs were famous for their strict rules and tough training. The players were weighed every day at 7 a.m. and at night they had to return their cell phones. The intensity of the training was so tough that the Bluefangs’ former setter Choi Tae-woong, now the head coach of the Cheonan Hyundai Capital Services Skywalkers, once joked that it’s easier to compete in matches than attend the Bluefangs training.

Although the intensity of the training may not have changed, Ko tried to change the atmosphere. Ko tries to get along with his players by listening to the music that they like so they feel more comfortable talking to the head coach.

“I’ve heard a lot of stories about the Bluefangs’ style,” said Hwang Gyeong-min, who was traded from the Wibee after the 2019-20 season. “It may be because the head coach is young, but communication isn’t as difficult as I expected.”

Ko has been trying to change the team’s environment to fit the new generation of young players. He believes that the team’s atmosphere will only change once both the players and coaches can relate to each other and share their thoughts comfortably.

“The players these days make decisions that I can’t understand from my standard,” Ko said. “For example, when they became free agents, [they don’t just think about the money,] they sign their contracts thinking about various things. My goal is to make the Bluefangs become the team that the players want to join.”

Recently, Ko suggested that captain and center Park Sang-ha use No. 10 as his jersey number. This number was used by Ko back when he was a player.

“Sang-ha has been leading the team very well,” Ko said. “Back when I was a player, I was center and a captain and wore No. 10, so I suggested it to Sang-ha, and he accepted it.”

Having changed his jersey number from 17 to 10, Park led the team throughout a practice game against the Cheonan Hyundai Capital Skywalkers on Aug. 14 in Yongin, Gyeonggi, by encouraging his players.

During the offseason, the Bluefangs played the most practice games.

“We’ve been losing a lot,” Ko said. “But until the cup matches, we’re trying to play as many games as possible. There are new players and new coaches. We’re in the process of figuring out what they’re good at and how they play.”

Starting Saturday, KOVO will start their Cup tournament at Jecheon, North Chungcheong. With the start of the regular season less than two months away, the Bluefangs are once again considered the weak team, as they are missing some of their key players.

“I admit that it’ll be difficult [to see good result] when looking at our strategy, but I’m not thinking about giving up,” Ko said. “I want to reorganize my team quickly and lead them to the top within the next two to three years.”

The Bluefangs will start their KOVO Cup match against the Skywalkers on Saturday, with a match scheduled to start at 4 p.m.