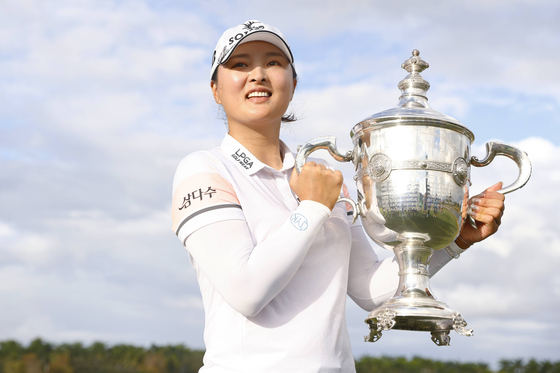 Ko Jin-young poses with the Rolex Player of the Year trophy after winning the CME Group Tour Championship at Tiburon Golf Club on Sunday in Naples, Florida. [AFP/YONHAP]


Ko Jin-young won the most important trophy of the LPGA season at the CME Group Tour Championship at Tiburón Golf Club, in Naples, Florida on Sunday, defending her title and winning the Rolex Player of the Year award.

The CME Group Tour Championship was the 29th and final event on the LPGA Tour this season, as it was the culmination of the season-long points competition, the Race to the CME Globe. LPGA golfers accumulate points in every official LPGA event to enter the season-ending championship. Following the penultimate Pelican Women's Championship, the field was set for the top 60 players in the Race to the CME Globe points standings.

After a relatively quiet first round that saw Ko open with a 3-under-par, 69, on Thursday, she entered the second round tied for 25th, five strokes off the lead.

After the second round, Ko was tied at ninth with three other players, six shots back from the lead. But on moving day, she pulled off an incredible stunt, birdying all holes from the par-4 second to the par-3 eighth. Despite bogeying the par-4 ninth, her clutch performance jumped her up to tie for first with just 18 holes remaining to the trophy.

Heading into the final round, four players were tied for first after 54 holes, but it was Ko to come out on top, playing a bogeyless round with nine birdies. Her only bogey in the last two days of the tournament was the par-4 ninth on moving day that cut her birdie streak to seven holes.

"Number one is No. 3 hole, second shot with the 7-iron," said Ko when asked about the most important shot from the day.

Despite battling with a wrist injury that kept her from practicing at the CME Championship, Ko put on an incredible performance, carding a 63 on the last day to tie her career-best 18-holes score and also setting the new tournament record at a big 23-under-par, 265.

"I'm happy to make like my best career score today, 63; 64 was my best score, record, but I crushed it and it's so happy," said Ko after her victory. 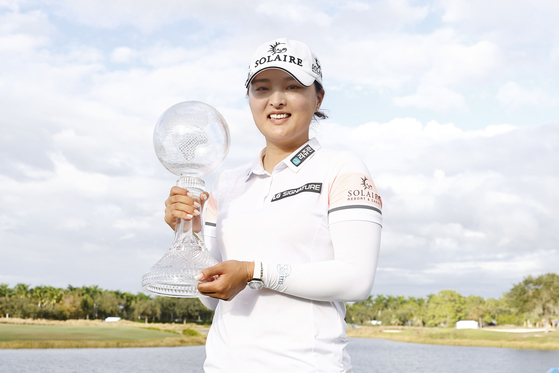 Ko Jin-young poses for a photo with the CME Globe trophy after winning the CME Group Tour Championship at Tiburon Golf Club on Sunday in Naples, Florida. [AFP/YONHAP] 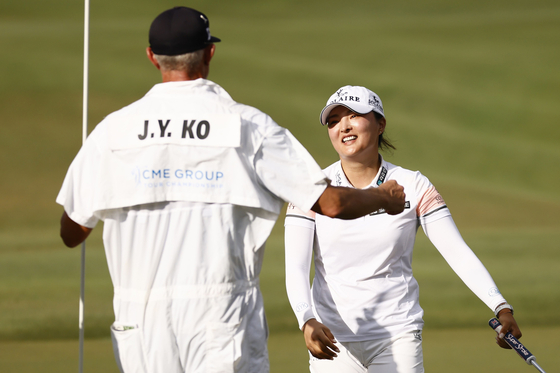 Ko Jin-young celebrates with her caddie David Brooker on the 18th green after winning the CME Group Tour Championship at Tiburon Golf Club on Sunday in Naples, Florida. [AFP/YONHAP]


Ko is now the most successful player on the LPGA Tour this season as she is the only golfer to have won five titles this year. She is the first winner to record five wins in a season since 2016, when Ariya Jutanugarn of Thailand won five events. She is also the third Korean to win five or more times in a single season, alongside Pak Se-ri and Park In-bee.

With the win, Ko secures her second Rolex Player of the Year award after winning it first in 2019. She is the first Korean player to win the prize twice, while four other Koreans have captured the award: Kim Sei-young in 2020, Ryu So-yeon and Park Sung-hyun shared the award in 2017 and Park In-bee in 2013.

"I didn't know that, and I'm happy to get Player of the Year again," Ko said. "It's a great honor to twice get the Player of the Year. And especially since we have a lot of good players from Korea on this Tour." 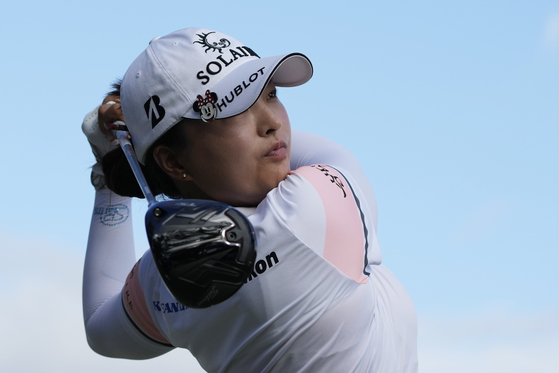 Ko Jin-young watches her shot on the 17th tee during the final round of the CME Group Tour Championship at Tiburon Golf Club on Sunday in Naples, Florida. [AP/YONHAP] 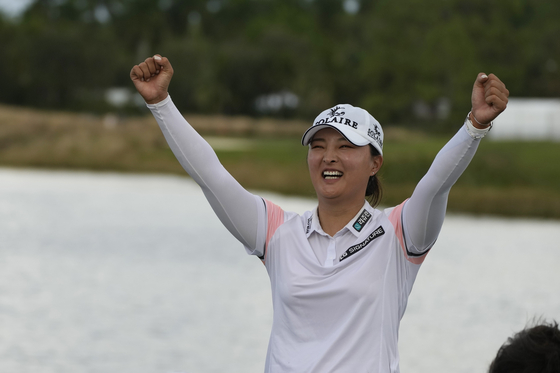 
Last year, Ko earned her way into the season-ending CME Championship after playing just three tournaments, making her season debut only at the Pelican Women's Championship in November. Despite finishing tied for 34th at the event, she bounced back with a fifth place finish at the Volunteers of America Classic, then tied for runner-up at the U.S. Women's Open. Building onto that success, she won the big trophy.

Fast-forward to this year and Ko has capped off a phenomenal season — having won her first season title at the Volunteers America Classic in July, she took her second win at the Cambia Portland Classic in September. She kept on going, winning two consecutive titles at the Cognizant Founders Cup and the BMW Ladies Championship, then winning the CME to walk away with the largest prize in women's golf: $1.5 million, a scoring average of 68.774, five victories with seven additional top-10 finishes and the Rolex Player of the Year title.