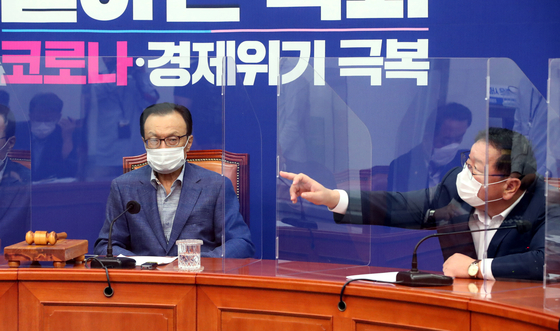 Rep. Kim Tae-nyeon, left, floor leader of the Democratic Party, touches a clear partition placed at his seat at the Supreme Council meeting, on Friday. [YONHAP]


The ruling party on Friday decided to maintain a plan to hold its leadership election next week, although one of the candidates for party chairman is in quarantine for two weeks.

The Democratic Party (DP) will hold its national convention at its headquarters building on Aug. 29 as planned, according to Rep. Ahn Gyu-back, head of the preparation committee for the event.

Earlier this week, the party scaled back its original plan, which involved holding the national convention at a sports stadium with hundreds of party members and journalists, to holding an online event at the headquarters. It said it will respect the preventive measures of the government that bar indoor gatherings of 50 people or more.

Former prime minister Lee has been in self-quarantine since coming into contact with a patient on Tuesday. He tested negative for infection.

As Lee’s isolation will end at noon on Aug. 31, he will be unable to attend the national convention.

On Thursday, one of his competitors, Kim, urged the party to delay the national convention to offer a fair opportunity to Lee.

The party decided to hold the election as scheduled, since all candidates, not just Lee, are campaigning online.

Among the three candidates, Lee is the clear front-runner. In the latest survey by Gallup Korea, 48 percent said they support Lee as the next chairman of the DP. Kim was backed by 15 percent and Park by 8 percent.

The poll of 1,002 people was conducted Tuesday and Wednesday. It has a 95 percent confidence level and a margin of error of plus or minus 3.1 percentage points.

In the upcoming chairmanship race, DP delegate votes will be weighted 45 percent, votes by paid members 40 percent and non-paid members 5 percent. Votes by the general public will count toward 10 percent of the total.

More information about the poll is available on the websites of Gallup Korea and the National Election Survey Deliberation Commission.