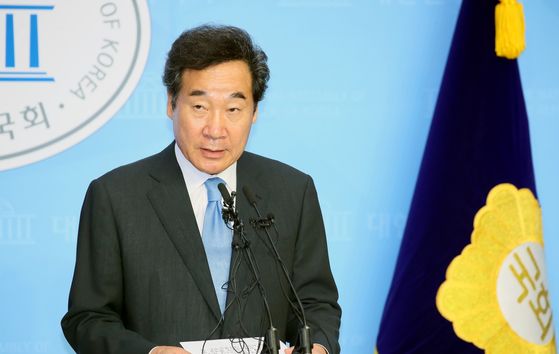 Lee Nak-yon, former prime minister and a lawmaker from the Democratic Party, declares his bid for the party chairmanship at a press conference on Tuesday. The election takes place in August. [YONHAP]

Lee, a lawmaker and the most prominent DP contender for the next presidential race, held a press conference at the National Assembly and declared his bid. “I reached the conclusion that I must do my best to fulfill my responsibility to overcome the national crisis,” Lee said.

“In the face of the national crisis, the DP needs a new determination and attitude,” Lee said about his party, which controls 176 seats in the 300-member legislature. “It must be a responsible party.”

Lee will face off against Kim Boo-kyum in a national convention scheduled for Aug. 29. Due to the coronavirus pandemic, the DP skipped many related events that normally take place including nationwide stumping.

A native of South Jeolla and a former journalist at the DongA Ilbo, Lee, 67, started his political career in 2000 by becoming a lawmaker from Hampyeong and Yeonggwang counties in South Jeolla. He was reelected to three more consecutive terms and then elected South Jeolla governor in 2014.

In 2017, President Moon Jae-in named him his first prime minister. Lee served in the post from 2017 till January 2020. In April, he was elected a lawmaker from Seoul's Jongno District, central Seoul for his fifth term.

So far, Lee is at the top of the polls for the next presidential race. In the monthly Realmeter poll, Lee has been first since June 2019.

Lee was reluctant until recently to run for DP chairman because the party's constitution said any chairman intending to run in a presidential primary must step down one year before a presidential election.

The next presidential election is on March 9, 2022, so Lee would have to step down from the chairmanship, if he is elected, after seven months — and the party would have to hold another national convention to elect a chairman and other Supreme Council members.

The DP changed its constitution last month so that even if the chairman resigns, Supreme Council members will stay to complete two-year terms. In other words, if Lee is elected Chairman and then resigns, the DP will only have to elect a new chairman, not its entire leadership. 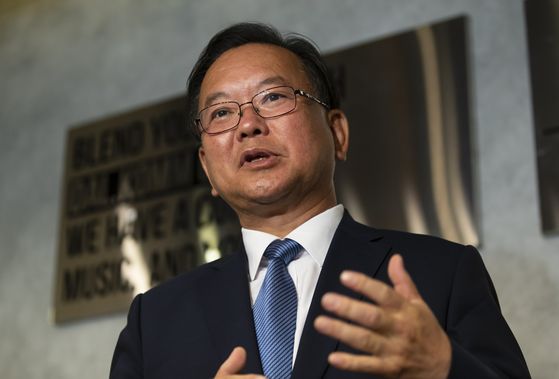 Kim Boo-kyum, former minister of interior and safety and a former lawmaker, talks to reporters on June 16. [YONHAP]

Kim Boo-kyum, former minister of interior and safety, will hold an official event to announce his chairmanship bid on Thursday. He has vowed that if he is elected, he won’t back down from running for president.

Kim, a former four-term lawmaker, is from Sangju, North Gyeongsang. He is known for encouraging an end to regionalism in Korean governance and politics.

In 2016, Kim defeated conservative candidate Kim Moon-soo in Daegu, scoring a 62.5 percent landslide, becoming the first politician from a liberal party to be elected to the National Assembly from the city since 1985. He served as Moon’s minister of interior and safety from 2017 through 2019.

Last April, Kim sought reelection from Daegu but was defeated by Rep. Joo Ho-young, current floor leader of the UFP.

During a visit to Gwangju on Tuesday, Kim said he will give up his presidential ambitions if elected DP chairman. He asked DP members to choose him as chairman because he is determined to serve two full years.

“If I am elected, I will faithfully fulfill my duty and bring victories to the party in 2021 by-elections and the 2022 presidential and local elections to complete the dreams of Kim Dae-jung, Roh Moo-hyun and Moon Jae-in,” he said.