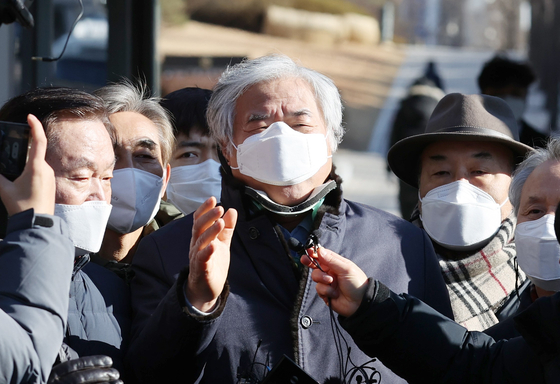 Rev. Jun Kwang-hoon calls his acquittal by the Seoul Central District Court on Wednesday a ″victory″ for the country, as he is released from custody. [YONHAP]


Rev. Jun Kwang-hoon, a right-wing pastor best known for his aggressive attacks on the liberal government, was acquitted by a local court Wednesday on charges of breaching electoral law and defaming President Moon Jae-in.

Jun hailed his acquittal by the Seoul Central District Court as a “victory for the Republic of Korea [ROK]” and a disaster for an administration “seeking to take apart” the country using the same Manichean language that earned him fame among Korea’s conservatives over the past decade.

But that same no-holds-barred speech was what led the 64-year-old reverend to be indicted and placed under pretrial detention in February for openly calling on participants attending several of his mass rallies from December 2019 to January 2020 to vote for the conservative main opposition Liberty Korea Party (LKP) — a predecessor to the People Power Party — in the April general election.

Such direct appeals to voters are illegal in Korea, except during the designated electioneering period.

The outspoken pastor also said during several rallies from October to December 2019 that Moon was a North Korean spy and out to turn South Korea into a communist dictatorship.

The court determined Jun was not guilty of both premature electioneering and libel charges, finding that his comments were within his rights.

“The freedom of speech is the foundation of democratic society; without guarantees on free expressions of will and lively debate, democracy cannot exist,” read a court statement on Jun’s sentencing.

“Negative restrictions must be applied strictly to allow room for the freedom of speech to breathe.”

As to the electioneering charge specifically, the court noted that Jun’s endorsements of the LKP were made at a time when individual candidates for the legislative races in April had not yet been nominated, and therefore did not constitute as premature campaigning.

Jun’s accusations against the president were also “exaggerated” and were closer to figurative “expressions criticizing a certain ideology” rather than attempts to approximate the truth, the court found.

Jun had been released on bail in April after complaining about his health but then staged several large rallies over the summer, including a controversial mass gathering on Liberation Day in August. These events generated intense public backlash after Jun’s church, the Sarang Jaeil Church, became the epicenter of a Covid-19 outbreak.

According to Seoul city officials’ estimates in September, the church was linked to at least 1,100 infections. Authorities also blamed Jun and his church for actively hampering official measures to prevent the contagion, alleging they omitted names from congregant lists they submitted.

Jun himself contracted the coronavirus and was hospitalized, but showed no hint of remorse, instead calling on Protestant churches nationwide to unite in defiance against the Moon administration’s “unjust” crackdown on his church.

After his recovery, Jun was again placed under detention in September for violating the terms of his bail by hosting the rallies, and stood trial while incarcerated. He was freed upon his acquittal by the district court on Wednesday.

Prosecutors said they would determine whether to file an appeal after studying the court’s verdict.

Expressing “deep regret” at the acquittal, the ruling Democratic Party on Wednesday issued a statement that said the verdict was “difficult to understand based on the people’s common sense” and could give license to more far-right elements in society seeking to “destroy public values.”