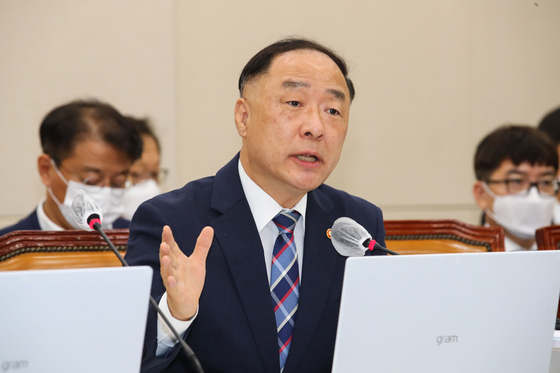 
The government is likely to extend a ban on short selling as the Korean economy is expected to take a hit following a recent spike in Covid-19 cases.

The six-month ban on short selling went into effect in March and was supposed to end on Sept. 16.

“The matter will be put up for discussion as an agenda item at the Financial Services Commission within the next two weeks,” said an anonymous official from the financial regulator.

The most likely scenario is another six-month extension of the ban, according to multiple anonymous government sources.

Finance Minister and Deputy Prime Minister Hong Nam-ki had expressed support of prolonging the ban at a National Assembly's strategy & finance committee meeting on Aug. 20, saying “relevant offices haven’t reached an agreement yet, but considering the various economic circumstances, it seems advisable that the ban should be extended.”

Financial Service Commission Chairman Eun Sung-soo raised the possibility of a third option on Monday — partially allowing short selling on several markets or stock items. The comment came during a a budget committee meeting held at the National Assembly that day.


Answering to a lawmaker’s question on splitting the ban’s application, Eun admitted it was one of the options local authorities were contemplating to “gradually extend the ban.”

Short selling is when shares are borrowed and sold immediately in the hope that they can be bought back again at a lower price to repay the stock loan. The Financial Supervisory Service (FSS) initiated the ongoing ban in March 16 after the local stock market crashed in March 13 due to Covid-19.

As the deadline neared, the discussion about short selling intensified, with some retail investors claiming the practice should be banned completely.

Their main argument was that the system created an uneven playing field between them and foreign and institutional investors, as the information and methods needed to profit from a fall in the price of stocks are not readily available to the average investor.

Politicians have voiced their opinions on the matter as well. In an Aug. 13 post on Facebook, Gyeonggi Governor Lee Jae-myung claimed the short selling ban should be extended for six months to one year, adding a list of four reasons why.

On the other side, proponents of short selling say it can prevent a bubble in the stock market, arguing that betting on the drop of share prices is part of the market’s mechanism for stocks to land on a reasonable price in the long term.

The main reason financial authorities are leaning toward the ban’s extension is the recent spike in coronavirus cases. After reaching rock bottom in March, the Korean stock market has experienced a V-shaped recovery, which some analysts attributed to the short-selling ban having increased the confidence of so-called “ant” retail investors.

Lifting the ban could negatively impact retail investor sentiment, adding to an already unstable situation for the local stock market.