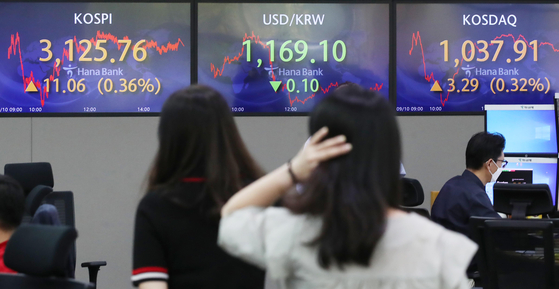 A dealing room at Hana Bank in Seoul on Friday shows the Kospi closing the week 11.06 points or 0.36 percent higher at 3,125.76. The FSC said to encourage more people to participate in the stock market, it is changing the regulation to allow investors to purchase local stocks in fractions. [YONHAP]

Investors will be allowed to buy fractions of a company's stock starting from the third quarter of next year, the Financial Services Commission (FSC) said Sunday.

Under current rules, investors cannot purchase less than a single share of an equity. On Friday, Samsung Electronics shares closed at 75,300 won ($64), which meant an investor would have to invest a minimum of 75,300 won. Starting in around a year, an investor will be able to purchase even one tenth of a Samsung share with a 7,530 won investment.

The FSC said the change is meant to energize the equities market by making it easier for people to participate with relatively smaller investments.

While investors will be able to get dividends accordingly to the size of their investments, if they do not own a whole share, they will not be able to vote as a shareholder.

In 2019, the Korean government changed regulations to allow Korean investors to purchase overseas stock in fractions.

But on the local equity market, this was prohibited due to the “indivisibility principle” implied in the Korean law, which prohibits people from transferring shares to another person in fractions.

Additionally, the infrastructure of the Korea Securities Depository (KSD), which is in charge of payments on stock exchanges, has been designed so that shares can only be traded as a whole.

In order to allow shares to be traded in fractions, brokerages will merge shares purchased by different investors in fractions.


If the combined shares fail to make a single share, the brokerages will cover the remaining amount when registering with the KSD.

The KSD will operate a separate account to manage fractioned stock.

“This will encourage people to invest in expensive stock and diversify their portfolios with smaller amounts of money, which also reduces their risk,” the FSC said. “It will also allow brokerages to provide new services that cater to the needs of investors.”


According to the government, the 2019 change that allowed Korean investors to purchase overseas stock in fractions through two local brokerages has been more successful than expected.

As of June this year, the amount of overseas stock that was bought or sold in fractions totaled $1 billion.

The FSC said it plans to revise several clauses in the Financial Investment Services and Capital Markets Act that will allow fractional stock purchases.

The change is expected to be implemented as early as next October or in November.