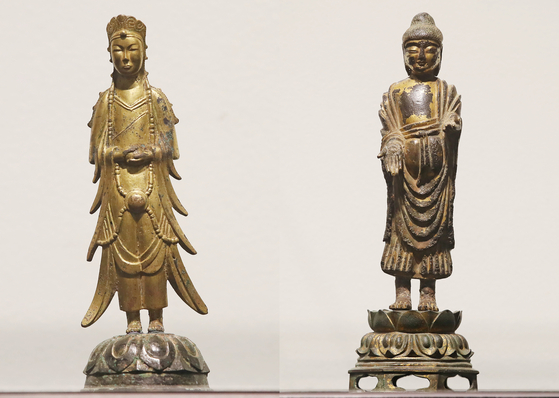 
The two rare Buddhist statues of the Kansong Art and Culture Foundation that failed to attract any bidders at a recent auction finally found a new home — the National Museum of Korea.

The state-run museum said Monday that it has purchased the two treasures — a Gilt-bronze Standing Buddha dating back to the Unified Silla Period (Treasure No. 284) and a Gilt-bronze Standing Bodhisattva dating back to the Three Kingdoms Period (Treasure No. 285). The museum is said to have paid a little less than 3 billion won ($2.4 million) for both treasures. The two items had gone up for sale at K Auction in May, each with a starting price of 1.5 billion won.

As the museum is closed due to the recent coronavirus pandemic, it said it will prepare a special exhibition showcasing the two Buddhist statues in the meantime so that the treasures can be viewed by the public as soon as the museum opens its doors again.

Recently, the Kansong Art and Culture Foundation, founded by legendary collector Jeon Hyeong-pil (1906-62) had placed three art treasures up for auction, citing financial difficulties. Haeak palgyeong and Songyu palhyeondo (Album of Eight Scenic Views of Seas and Mountains and Eight Confucian Scholars of the Song Dynasty) by renowned landscape painter of the Joseon Dynasty, Gyeomjae Jeong Seon (1676-1759) also went up for auction in July, but no bids were made for that either.

As the late Jeon is a well-respected figure by Koreans for dedicating his fortune to buying and preserving the country’s treasures during the Japanese colonization, preventing them from ending up in Japan or elsewhere, the news of the foundation facing bankruptcy shocked the public. The foundation possesses about 5,000 items, including 12 national treasures and eight treasures.

The purchase marks the first time that the foundation, which established the country’s first private museum, sold off part of its collection. Kansong's vast collection has been preserved by the founder's descendants, including his eldest son, Jeon Seong-woo, who died in 2018 and his grandson, Jeon In-geon, who is now the director of the Kansong Art Museum and the foundation.

“Many people were concerned by the news that the Kansong Foundation is suffering from financial hardships and expressed worry that the country’s treasures may end up in the hands of a private collector while tainting the late Jeon’s great aspiration to properly keep and preserve the country’s treasures. Therefore, the National Museum of Korea decided to make the purchase,” said an official from the museum. “The museum plans to carry out in-depth research of the two Buddhist statues and also allow the public to enjoy this cultural heritage of Korea.”