Production and performances halted amid spike in Covid cases

Production and performances halted amid spike in Covid cases 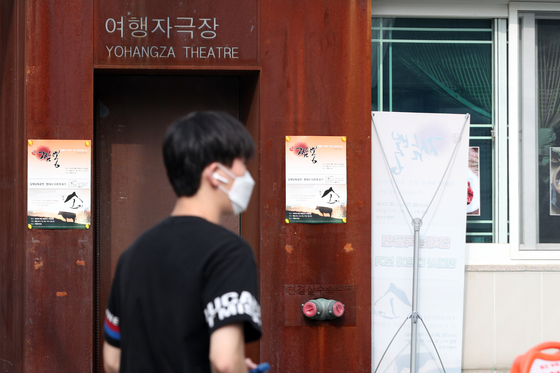 A photo of the Yohangza Theatre situated in Daehangno in Jongno District, central Seoul, where 26 actors and crew from the play "Jjambbong" tested positive for the coronavirus. [NEWS1]


The local entertainment industry has been left reeling after a spike in cases of coronavirus which has continued to grow over the past week.

The film industry was the first to take action after the government raised its social distancing levels from Level 1 to Level 2 from Sunday.

The film distributor Showbox for the film “The Golden Holiday,” featuring actors Kwak Do-won, Kim Hee-won and Kim Dae-myung, announced the postponement of its local premiere three days before the release date. Other upcoming films such as animated film “Beauty Water” and director Zhang Lu’s latest film “Fukuoka” canceled the offline press screening set for the following days. Christopher Nolan's long-anticipated “Tenet,” which had also scheduled a press screening and a live conference with the director and actors John David Washington and Elizabeth Debicki on Aug. 19 and 20, canceled those events.

"Tenet" and "Fukuoka," however, will not postpone their premieres and release their films accordingly on Wednesday and Thursday.

The most recent spike has hit the local entertainment industry particularly hard after actors tested positive for the coronavirus.

After actors such as Seo Sung-jong, Heo Dong-won and Kim Won-hae tested positive for Covid-19, the production for their drama series and reality shows were halted. Related crew and cast who came in contact with the actors were forced to self-isolate until they received their test results. Some other actors to be tested included Go A-ra, Seo Yi-sook, Ye Ji-won, Oh Man-seok and Kim Hee-jung. All their results came back negative.

Due to the increased risk, KBS, CJ ENM, JTBC and Netflix all announced they would be temporarily halting their productions.

“After an emergency meeting, we’ve decided to temporarily halt production of drama series to prevent further infection of Covid-19 for a week — from Monday to Sunday,” KBS stated in an official statement released on Saturday. “Due to the halt, our upcoming drama series, airing schedules for ‘Do Do Sol Sol La La Sol,” initially set to air from Aug. 26, and other drama series will have to be readjusted.”

Although all the crew who worked with Seo on the KBS drama series “Men are Men” tested negative, the broadcaster decided to cancel the airing of the last two episodes to ensure the safety of all those involved.

CJ ENM also decided to halt production for their cable channels tvN and OCN from Monday to Aug. 31.

“[But] the tvN drama series ‘Stranger 2’ and upcoming ‘Record of Youth’ will air accordingly as the filming was finished before the first episodes began to air,” the entertainment company stated. “Outdoor-based tvN variety show 'Hometown Flex' will also stop filming until Aug. 31.”

Local film productions for Netflix original series “Round Six” featuring Lee Jung-jae and Park Hae-soo, and “All of Us are Dead,” the highly-anticipated zombie flick based on popular Naver webtoon “Now at Our School” by cartoonist Joo Dong-geun have all come to a stop too.

Local media outlet Star News reported on Monday that filming for SBS variety shows “Running Man” and “Master in the House” was canceled for this week.

Plays and performances have also been hit hard by the recent cluster. From the play “Jjambbong” in which Seo Sung-jong, Kim Won-hae and Heo appear together, 26 staff tested positive for Covid-19.

Musical “Kinky Boots,” which was being staged at Interpark Hall in Blue Square building in central Seoul, canceled performances scheduled on the weekend as one of the actors was in contact with a patient who tested positive on Saturday morning. The actor, whose name was not revealed, tested negative on Sunday and the musical will resume from Tuesday.

Actor Choi Jae-rim, who is featuring in both “Kinky Boots” and another musical, “Rent,” did not feature in the latter performance on Aug. 22 as all the actors and crew from the former were ordered to self-isolate.

After actor Yoo Hyun-seok was reported to be indirectly in contact with a patient, the Aug. 22 performances of musicals “Nanseol” and “Bloody Silence: Ryujin the Vampire Hunter” were canceled. Another actor from musical “Something Rotten!” was also reported to have indirectly come into contact with a patient, which led to the cancellation of all weekend performances. All four actors — Yang, Ko, Yoo and the actor from “Something Rotten!” — reported they had tested negative on Sunday.

Musicals “Nanseol,” “It Rains Cats and Dogs” and “Something Rotten!” are to resume performances from Tuesday, while “Bloody Silence” will resume from Sept. 1.