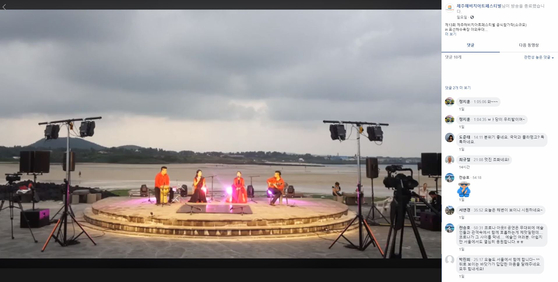 This year's Jeju Haevichi Arts Festival, which kicked off on Monday, is being held remotely by streaming performances online via its official website (www.jhaf.or.kr). [SCREEN CAPTURE]


Every year, hundreds of artists behind performances and concerts, produced and organized locally, participate in the Haevichi Arts Festival on Jeju Island, hoping to land a deal with arts centers and festival organizers both in and outside the country.

The annual Jeju Haevichi Arts Festival, which is held every summer at the island’s Haevichi Hotel & Resort, is one of the biggest networking platforms for local performing artists, producers and organizers.

Through the festival’s 12th edition held last June, which about 180 arts centers across Korea and 260 performing arts exhibitions and arts education groups participated in, dozens of contracts were signed, playing a large part in revitalizing the local performing arts industry.

When the coronavirus became a pandemic early this year, forcing most performing arts venues to shut, the local performing arts groups canceled all scheduled shows and festivals, hoping to see a silver lining at this year’s Haevichi Arts Festival.

But with no sign of the virus dying down, the Korean Cultural & Arts Centers Association and the Jeju Special Self-Governing Province — the co-organizers of the Haevichi Arts Festival — decided to take this year’s festival, which includes an “Arts Market” where “purchases” are made between arts centers and performing arts groups, online.

According to the Korean Cultural & Arts Centers Association, only the essential members of the organizers and performing arts groups that stage shows, will come together in Jeju while the rest will be able to see the whole festival online through the festival’s website (jhaf.or.kr). This year’s festival kicked off on Monday. The official festival will come to an end on Thursday while off-stage fringe events will continue until Sunday. 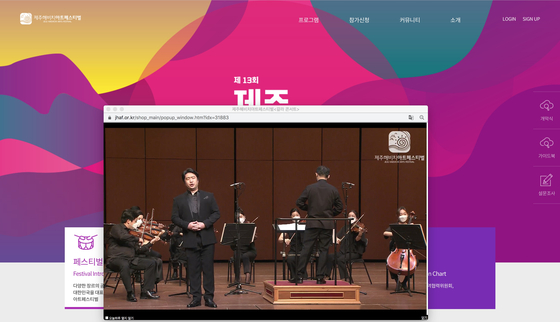 A festival-eve concert is held by the Jeju Haevichi Chamber Orchestra on Sunday at the Jeju Arts Center. The concert was streamed live. [THE KOREAN CULTURAL & ARTS CENTERS ASSOCIATION]

“I believe there will also be positive sides to an online festival such as being able to transcend time and space,” Lee added. “This year, about 130 arts centers and 180 performing arts groups and organizers will be participating officially, but more international arts centers and festival organizers who usually couldn’t make it to Jeju, can also take this opportunity to go to our website and take a thorough look at so many talented performing arts groups from Korea.”

The festival signaled its kickoff on Sunday with a “festival eve” concert by the Jeju Haevichi Chamber Orchestra. The concert was held in an empty auditorium at the Jeju Arts Center, which was streamed live, while the official festival began on Monday morning with the screening of an opening video.

“It is a shame that I can’t go down to Jeju this year to mingle with the others in the performing arts circle, but I’m just glad that the festival didn’t get totally called off,” said an official from the Chilgok County Education and Culture in North Gyeongsang, who says she’s been visiting the festival every year to look for interesting performing arts groups to invite to the county’s various festivals. 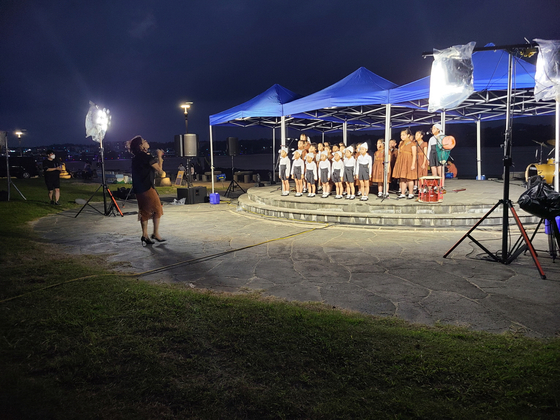 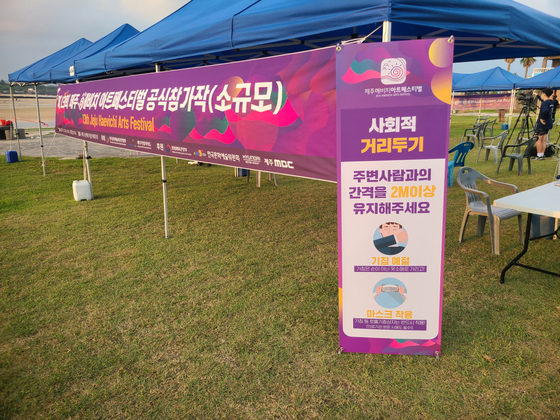 
Usually about 30 performing arts groups are selected to perform during the festival, but this year, only a couple of groups will be staging their shows in Jeju to be streamed live. Other groups are simply uploading two to three video clips of their latest works on the festival’s website.

The performances that will be streamed live include a play titled “The story of an Old Couple” to be available on Wednesday at 7 p.m. and the musical “Carmen” on Saturday at 5 p.m. Both performances will be staged at the Jeju Arts Center.

Many performing arts groups doubt if such a type of festival, where networking is one of the biggest objectives, can be as effective online, but say in unison that they don’t have any other option but to lay their hopes in this online event.

“Honestly, we question the effect of this online festival,” said Kim Sei-young, manager of the Universal Ballet, “but there’s nothing we can do. We are forced to cancel the shows that we’ve prepared for so long and invested a lot in. We don’t know what will happen next year and whether participating in this online event will actually help us or not. But like I said, there’s nothing we can do, so we’ll see how it goes.”

The Universal Ballet Company, a private ballet group of some 70 performers and 50 staff members, has been participating in the festival every year and been signing big and small contracts with diverse local arts centers and festivals at the Haevichi Festival every year.

“We are the biggest private ballet company in Korea but we’ve been hit very hard by Covid-19. We were able to only stage about 10 performances this year, which is only one eighth of our usual number, as we hold about 80 to 90 performances every year,” Kim said. “Imagine what it must be like for smaller ballet companies. With all the performances getting canceled last minute and not getting enough support from the government, it’s not easy for private groups to survive during this pandemic. Having this online platform where we can promote ourselves is at least a relief for us.”

The ballet company posted highlight clips of its “Gala show,” “Don Quixote” and “Simcheong” on the festival's website.

“We just have our fingers crossed that at least some contracts will be signed through this unprecedented online festival,” she added.