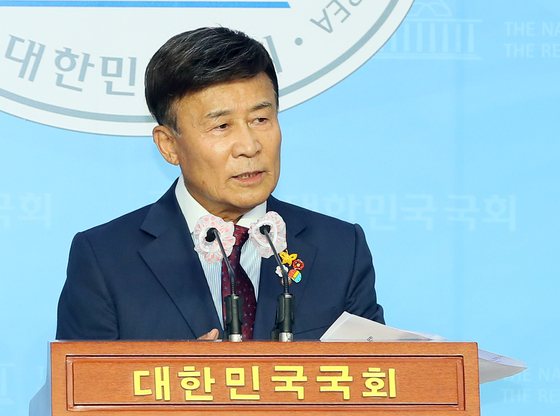 Kim Won-wung, head of the Heritage of Korean Independence (HKI), holds a press conference at the National Assembly on Monday and calls the main opposition United Future Party (UFP) a "pro-Japan collaborator." [YONHAP]


The Ministry of National Defense pushed back on Wednesday against recent remarks by the head of the country’s main veterans' organization, who has argued recently that the legacy of the late General Paik Sun-yup must be reevaluated.

Starting with his speech during a Liberation Day ceremony on Aug. 15, 2020, Kim Won-wung, chairman of the Heritage of Korean Independence (HKI), made a series of public remarks arguing that the country must reconsider Paik’s record. Known for his heroism during the Korean War, Paik has also been a controversial figure due to his checkered past, having served under the Japanese imperial army before Korea’s liberation.

“The late General Paik led many battles during the Korean War and defended the country from a crisis,” the ministry said in a statement sent to Rep. Kim Do-eup, a lawmaker from the main opposition United Future Party (UFP) who requested the ministry's position on the remarks. “He is the first four-star general of the country who served as the Army Chief of Staff twice, making undeniable contributions to the advancement of the military and the U.S.-Korea alliance.”

At the government ceremony marking the 75th anniversary of Korea’s liberation from Japan, attended by President Moon Jae-in, Kim made a provocative speech, saying the country has failed to settle its history of pro-Japan collaboration. He denounced President Syngman Rhee, the first president of the country, and Ahn Eak-tai, composer of the national anthem, as Japanese collaborators.

Kim also said that top military generals who had led campaigns under the Japanese Imperial Army to kill independence fighters are buried at the National Cemetery. There are 69 pro-Japanese collaborators’ graves in the National Cemetery, he said, and demanded that they be relocated.

Established in 1965, HKI is a public institution under the Ministry of Patriots and Veterans Affairs. Kim, a former three-term lawmaker, was elected as the head of the HKI in June 2019.

Kim has since followed up those pronouncements with more controversial remarks. On Aug. 17, he told KBS Radio that Paik’s accomplishments during the Korean War were exaggerated, demanding a fact-finding mission.

“When the Korean War broke out on June 25, 1950, Paik was the commander of the First Infantry Division of the Army, but he didn’t show up,” he said. “So, soldiers and officers of the division ran away. That alone deserves capital punishment.”

Kim also claimed that Paik’s role in leading his troops to victory in the Battle of Tabu-dong, a critical moment in the defense of the Busan perimeter in September 1950, and in deterring the North Korean military, was exaggerated. Kim argued that U.S. troops had already destroyed the North Korean troops, and Paik’s soldiers marched on afterwards.

In its statement to Rep. Kim, the Defense Ministry insisted that Paik had led many battles including the Battle of Tabu-dong to victory.

On Tuesday, Minister of Patriots and Veterans Affairs Park Sam-duck told the National Assembly that Kim was given a warning for his controversial remarks.

During the National Policy Committee meeting on Tuesday, UFP Rep. Yun Jae-ok said the ministry, which oversees the HKI, must take action in response to Kim’s politically charged remarks.

On Monday, Kim held a press conference at the National Assembly and called the UFP a "pro-Japan" organization. He also singled out some UFP politicians, including Jeju Governor Won Hee-ryong, who he claimed has protected Japanese collaborators.

Yun said the law forbids the HKI to engage in any political activities, but Kim has been committing violations for days since his Liberation Day speech.

Park responded that a warning was issued to Kim. He said the ministry oversees 14 groups representing veterans and patriots, and many of them are critical of Kim’s actions.

Kim denied Tuesday that Park issued him a warning. He told the Yonhap News Agency that he hasn't spoken with the minister recently.

Following Kim’s interview, the ministry again refuted his claim, stating that a ministry official telephoned Kim and warned him to speak more carefully on Aug. 20.