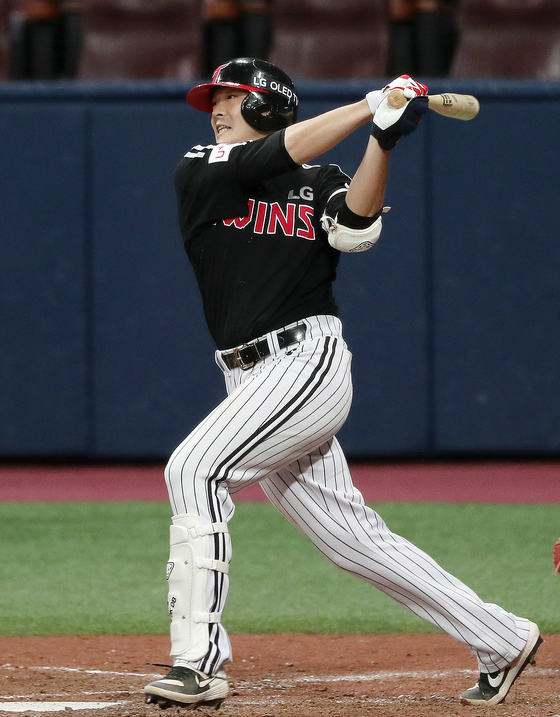 Lee Hyung-jong of the LG Twins swings a bat during a game against the Kiwoom Heroes at Gocheok Sky Dome in western Seoul on Aug. 20. [NEWS1]


Until this season, LG Twins’ outfielder Lee Hyung-jong has spent his career in the middle of the pack.

The perennial journeyman started his career as a pitcher, retired for a bit and then suddenly came back again as a batter.

Lee debuted in the KBO as a pitcher with the Twins in 2010, lasting just a few months before he made the unusual decision to retire from baseball and try his hand at professional golf.

Things didn't go well for the KBO's answer to Michael Jordan on the golf course, where Lee never quite made the cut.

In 2013, Lee returned to the KBO, still as a pitcher at this point. After undergoing surgery and rehabilitation, Lee asked to be moved to the batting roster in 2014. It was another two years before Lee actually debuted as a batter in 2016, and it was quickly evident that he'd finally found the thing he wanted to do.

Lee played in 61 games in his debut season, earning a spot in the starting line up from then on and never looked back.

But nothing is ever simple with Lee. Things weren't looking great again this year, when Lee was hit by a pitch from Doosan Bears pitcher Lee Yong-chan in a practice game just four days before the start of the season.


This injury took Lee out for two months and it wasn’t until July 10 that the 31-year-old outfielder finally made his way back into the Twins’ entry. By the start of August, Lee was clearly back in the swing of things.

Just for August, as of Thursday 6 p.m., Lee has a 0.362 batting average with four home runs and 11 RBIs. With Lee and the return of other Twins’ players, the Seoul club is standing strong in the top half of the regular season standing.


Lee may not have hit as many home runs, but his home runs were crucial as most came in clutch spots, helping the Seoul club to win their games.

Along with his solid performance, Lee became a father on Aug. 17.


Q. You’ve been playing really well this month. Did you make any changes to your swing?

A. Changing my grip was crucial. The end of my bat is thick, but [infielder Kim] Min-sung’s bat has a thinner end. So I’ve been borrowing Kim’s bat these days. After I returned from injury, I’ve been putting my little finger on the end when I swing the bat.


Q. How about your swing mechanism?

A. I used to make a full swing. The trajectory of my swing is more of an upper swing. With that swing, when pitches were thrown higher, it felt like l was chopping. But now, I’ve leveled out and lowered my swing. When we make changes to the swing during the season, some people tend to think of it negatively. But our swing coaches Lee Byung-kyu and Lim Hoon supported me.


Q. Looking at your statistics, your slugging percentage stands out this season compared to previous years. What have you changed?

A. This season, I’ve been able to make a lot of strong hits, and the distance has increased. For me, this is like the beginning of the season, but [my slugging percentage] was never this high. I hope to maintain that until the end of the season.

Up until last year, I didn’t mention a specific goal for that season. Before the start of this season, I said that I wanted to hit 20 home runs. I felt that I need to hit more home runs to have a set spot within the team. I want to become a batter who hits a lot of home runs during my time with LG.


Q. Were you disappointed by your injury right before the start of the season?

A. Yes. But I think that turned out to be a blessing in disguise. It allowed me to set higher expectations for next season than this year. I’ll work as hard as I can.


Q. In the batting lineup, you’ve been going around different positions. Is it difficult when your batting order changes often?

A. A bit. I do get some stress and pressure about where I sit in the batting order.


Q. Between playing as designated hitter and being assigned as an outfielder, which do you prefer?

A. It’s definitely better to be out in defense as well. The roles of playing as left, center and right fielders have been organized in my head. Due to my error during a game against Kia, I concentrated more for the game against NC. Thanks to that, I had a good result. When you make an error, you get a huge amount of pressure. But I was thankful to coach Ryu Ji-hyun and Kim Ho, who encouraged me by telling me that I can do better next time.


Q. This season, LG is holding onto its spot among the top teams. What is your and the team’s goals?

A. Once the season ends, I want to be recognized as a player who fulfilled a lot of roles. Also, I really want to get to the Korean Series and win. In this team atmosphere, I feel like it’s a challenge that’s worth trying for.