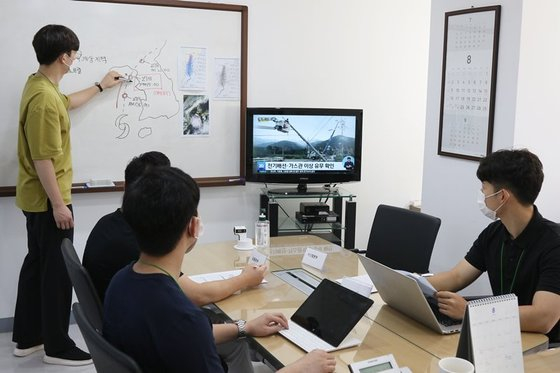 
Everyone's always complaining about the weather but nobody does anything about it, goes the old joke.

Tell that to Korea's convenience stores. They have embraced the weather as a vital business strategy.

BGF Retail, operator of convenience store chain CU, formed a task force on Aug. 24 ahead of Typhoon Bavi, which threatened the Korean Peninsula last week. Employees from 10 different departments analyzed the typhoon's expected route and predicted how it would affect each part of the country in order to come up with products customers would need.

BGF Retail has an executive meeting every month, and it always starts with a weather briefing. The company’s executives pore over data from the Korea Meteorological Administration.

Since 2001, BGF Retail has been sending weather data to all of its CU stores across the country. Store owners can check it every two hours through their point-of-sale system.

Store owners use the data to make orders. For example, even if ice cream sales are rising due to a suffocating heat wave, if the weather is predicted to change to rain the following week, owners order large amounts of makgeolli, or unrefined Korean rice wine, instead of ice cream. Many Koreans love to drink makgeolli when it rains.

Convenience stores’ best-selling products such as sandwiches, samgak gimbap (triangle-shaped rice balls wrapped in seaweed), and dosirak (packaged meals) perish faster in the summer and have a shorter shelf life than processed foods.

During this year’s historically long and wet rainy season, sales at CU stores varied depending on a region’s weather conditions.

In central regions of the country that came under heavy downpours, sales of umbrellas spiked 125.1 percent compared to the same period last year. During that period, sales of makgeolli increased 36.2 percent while sales of pre-cooked food products grew by 31.5 percent. Sales of anju, or snacks for drinkers, jumped by 28 percent followed by food ingredients, which saw a 27.2 percent increase in sales as people stayed in and cooked.

The country’s southern regions, on the other hand, were hit by a scorching heat wave. CU’s sales of wine rose by 79 percent while sales of health supplements increased 38.4 percent. Ice cream sales rose 37.7 percent, followed by cups filled with ice — used for a variety of cold drinks — which saw a 35.1 percent increase in sales.

Approaching typhoons usually lead to a surge in demand for fruits and vegetables in convenience stores, along with canned goods, microwave rice, as well as ramyeon.

Between Sept. 6 to 10 last year, when Typhoon Lingling hit the Korean Peninsula, sales of fruits and vegetables in CU rose by 22.3 percent compared to same period a year earlier, while those of ramyeon increased 18.9 percent. During the same period, home meal replacements saw an 18.4 percent increase in sales while soju saw a 9.3 percent rise.

He added, “[BGF Retail] is constantly providing information about changing weather conditions, trends of popular seasonal products, as well as business strategies to its CU convenience stores [across the country].”