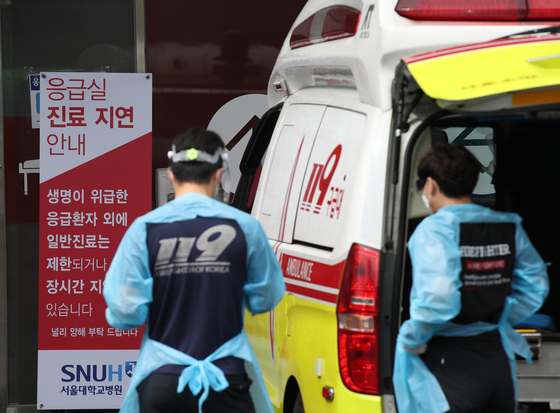 Emergency medical staff behind an ambulance parked at Seoul National University Hospital in central Seoul on Friday, the third day of a nationwide doctors' strike. [YONHAP]

With no end in sight to the nationwide doctor strikes, the Health and Justice ministries, along with the Korean National Police Agency, on Friday urged the doctors to return to work and said they will be penalizing those who do not comply.


Doctors and trainee doctors across the nation have been intermittently on strike during the past few weeks to protest the government’s planned package of health care reforms.


The latest strike by the trainee doctors began on Aug. 21 and will continue indefinitely. According to the Ministry of Health and Welfare, 69 percent of the country’s 8,825 trainee doctors, including medical interns and residents, were on strike as of Thursday.

Fully-licensed doctors began their three-day strike on Wednesday. Only around 10 percent of the 130,000 doctors in the country were reported to be taking part, however.

The Health Ministry on Wednesday said it had issued orders to 358 medical interns and fourth-year residents who walked off their jobs on Aug. 21 to return to emergency rooms and I.C.U.s in 20 hospitals in Seoul and Gyeonggi.

They also carried out on-site inspections at major hospitals to verify whether trainee doctors complied with the order.

Finding at least 10 who did not, the ministries announced Friday that they were reported to the police for violating the Medical Service Act. They could face jail sentences of up to three years, fines of up to 30 million won ($25,000) and the revocation of their medical licenses.

The ministries said Friday that the order will be expanded and applied to all doctors and trainee doctors throughout the country, and that they will continue the on-site inspections.

“We’re still hoping to solve the issue through conversations with the doctors,” said Park Neung-hoo, minister of health, in a press conference Friday. “We decided to expand the order nationwide because the country is in a medical emergency.”

To protest the government’s order on Wednesday, as many as 76 percent of all 16,000 trainee doctors in the country have prepared resignation letters, according to Korean Intern Resident Association (KIRA).

“The government reporting trainee doctors to police will only make the trainee doctors fight harder, and the 130,000 fully-licensed doctors will join their fight,” Choi Dae-zip, director of the Korean Medical Association (KMA), which is organizing the strikes with KIRA, said Friday. “We will see if we can report the health minister for abuse of power.”

At least one person who may have otherwise lived may have died due to the lack of available doctors, according to the Buk District Police Precinct in Busan and the Busan Fire Department.

A man in his 40s died in Busan on Thursday after he was unable to locate a doctor over a three-hour period amid the nationwide doctors’ strike.

The Busan fire and emergency department received a report Wednesday at 11:23 p.m. that a man in his 40s appeared intoxicated and in need of immediate help.

After picking up the patient, the medical responders were in search of a hospital that could perform gastric irrigation to wash suspected drugs from his stomach.

None of the nearby hospitals were able to perform the procedure, however.

They then called six hospitals and seven clinics in Busan and South Gyeongsang, the province around the city, in search for a doctor who could perform gastric irrigation, but found none available.

At about 1 a.m. Thursday, they heard back from the Ulsan University Hospital, which was able to secure a doctor. The man was finally transported there, but died while undergoing operations.

The Health Ministry's announcement last month that it planned to increase the number of medical school admissions by 400 annually to a maximum of 4,000 in the next decade prompted fierce resistance from both KIRA and the KMA, culminating in their decision to launch coordinated strikes.

The most contentious proposals include an increase in medical school admissions and the establishment of a public medical school, which KIRA and KMA claim will distort the medical industry by encouraging new doctors to specialize in profitable non-essential services like plastic surgery.

The government argues that an increase in the number of doctors is necessary to meet health care demands in rural areas, where the elderly population is rapidly growing. The density of physicians per 1,000 people in Korea stands at 2.4 currently, significantly lower than the Organisation for Economic Cooperation and Development (OECD) average of 3.5.