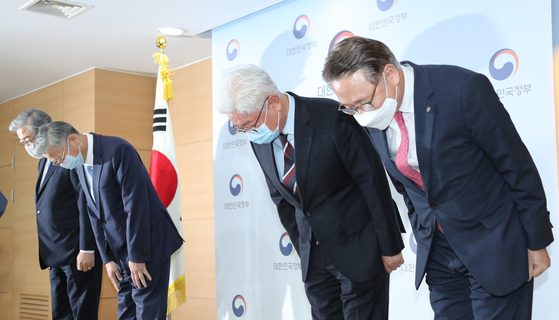 The presidents of some of Korea’s largest university hospitals bow as they apologize to the public Thursday at the Central Government Complex in Gwanghwamun, central Seoul, for their students’ strike last summer. [YONHAP]

The presidents of some of Korea’s largest university hospitals jointly relayed a public apology Thursday on behalf of their students’ strike last summer, while imploring the government to offer another chance for college seniors to take the national medical licensing exam.

The statement, which was read in front of news cameras Thursday morning at the Central Government Complex in Gwanghwamun, central Seoul, came as government authorities continue to reject pleas from medical students to receive additional applications for the annual medical licensing exam.

Nearly 85 percent of those who were supposed to apply for the exam last month didn’t, in a show of solidarity as they took part in a nationwide strike of doctors and trainees to protest the government’s medical reforms.

The reform package included a 4,000-student increase in medical school admissions over the next decade, the establishing of a public medical school, extending national health insurance coverage to include traditional Korean medicine and expanding remote medical services.

Following weeks of wrangling, the Korean Medical Association (KMA), which represents nationwide medical clinics, reached an agreement with the Ministry of Health and Welfare to suspend the medical reforms until the coronavirus crisis subsidies — days before the date by which medical students had to sign up for the medical licensing exam. That deadline had already been postponed twice as students were on a strike.

But medical students rejected the truce, saying their views were not sufficiently reflected. They didn’t sign up for the test, and the exam eventually started without them on Sept. 8.

But as doctors began to return to work, medical students lost momentum, and on Sept. 24, they announced in a joint statement that they were willing to take the test.

The government, however, refused to offer another chance to the students, saying they would have to earn “public sympathy” first.

Kim Young-hoon, CEO and president of Korea University Medicine, who read the statement aloud, said he and his colleagues were “seriously worried” about the “medical vacuum” that would be caused if the nearly 2,700 students miss their chance to earn their medical licenses.

Kim urged the public to chastise senior doctors like him, not the students, for going on a strike during the pandemic, and give one more chance to the doctor hopefuls to end their six years of medical training on a positive note by taking and passing the exam.

The doctors then held a meeting with Jeon Hyeon-heui, chairperson of the Anti-Corruption and Civil Rights Commission (ACRC), to ask for the organization’s support, but Jeon only repeated the government’s stance that public agreement had to be reached first.