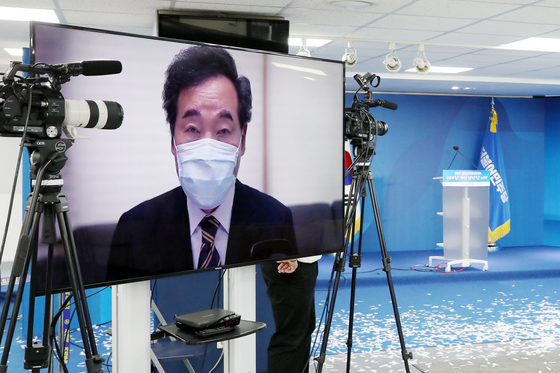 Rep. Lee Nak-yon accepts the chairmanship of the ruling Democratic Party (DP) through a remote acceptance speech delivered from his home. Lee won 60.77 percent of the vote in his party's convention held Saturday. [NEWS1]

Lee, who was elected a lawmaker for Jongno District in April after his tenure as the longest-serving prime minister since 1987, was elected chairman with 60.77 percent of the vote, beating Kim Boo-kyum and Park Ju-min by landslide margins in a convention largely held online due to Covid-19.

Now in control of a ruling party with an unprecedented legislative super majority, Lee is expected to prepare for a presidential run in 2022, for which he is already leading in national polls.

In an acceptance speech delivered from home, Lee pledged to realize five main objectives: victory over Covid-19, defending the livelihoods, preparing for a post-Covid world, politics of unity and expediting innovation.

The most urgent of these was overcoming Covid-19 and its socioeconomic fallout, Lee said, promising to enlarge the country's social safety net by expanding support for the unemployed.

Lee swore to pursue compromise with the opposition while upholding the DP's main principles. To those ends, he proposed four special parliamentary committees jointly with the conservative opposition regarding emergency economic measures, balanced development, energy and the low birthrate.

"By [focusing my efforts on the five objectives], I will lay the foundations for the Moon Jae-in administration's success and [another DP] administration," Lee said. “I will make the Republic of Korea into a first-rate country in which all live well together."

While Lee's victory had been anticipated by many observers, Saturday's convention was anything but ordinary as it was the first to be carried out mostly online by a major party.

Lee Nak-yon is in self-quarantine though Sep. 1 following indirect contact with a person infected with the virus, though he later tested negative for Covid-19.

Among those physically present for the ceremony were Suwon Mayor Yeom Tae-yeong and Reps. Kim Jong-min, Noh Woong-rae, Shin Dong-kun and Yang Hyang-ja, who were elected to serve on the DP's leadership council.

The DP had originally planned to hold a convention of about 50 participants in line with the government's Level 2 social distancing guidelines. But the recent spike in coronavirus infections this month prompted the party to turn the event into an almost completely online affair, with its leading figures delivering their addresses remotely.

Through a taped address, President Moon called on his party's new leadership to restore public faith in the National Assembly and encourage cooperation with opposition parties in a concerted effort to overcome Covid-19.

Lee's move to seize control of the party's leadership with just under two years left until the next presidential election mirrors the efforts of Moon in 2014.

At the time, Moon ran and won a fiercely competitive election contest to lead the DP's predecessor amid persistent internal strife and infighting among the party's different factions.

The party eventually splintered during Moon's tenure as chairman, but the realignment allowed a now more monolithic DP to win a close parliamentary victory in 2012 that proved instrumental in pulling the liberals out of almost a decade in the wilderness in 2017.

Lee faces a much more different landscape than his predecessor, with the party stronger than it has ever been in decades, but his lack of fiercely loyal support enjoyed by Moon means Lee will have to focus his efforts on winning over the party's base.

His tenure as Moon's first prime minister and his previous experience as a highly-popular governor of South Jeolla have allowed Lee to top presidential polls for almost two years, but he has recently faced a formidable challenge from Gyeonggi Gov. Lee Jae-myung.

Several polls earlier this month showed Lee Jae-myung ahead of Lee Nak-yon by a slight margin, bolstered by his no-nonsense response to Covid-19. Lee Nak-yon's support, by contrast, appeared to have dwindled with the Moon administration's approval rating, though the latter has recovered in recent days.

In light of Lee's inevitable association with the incumbent administration, analysts say the post of party chairman may become a double-edged sword for the presidential hopeful as it ties his future with that of Moon's performance throughout the last years of the president's term.