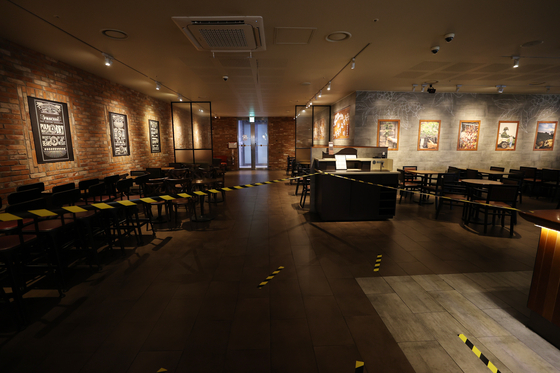 Starbucks Korea's Press Center branch in central Seoul is empty on Aug. 30 after the government said coffee chains in greater Seoul can only sell takeout and deliveries. [YONHAP]

According to new rules that went into effect Sunday, restaurants, standalone cafes and bakeries in the greater Seoul area must stop serving customers in-person by 9 p.m. From 9 p.m. through 5 a.m. the next morning, only takeout and deliveries are allowed.

Coffee shop chains in the greater Seoul area will only be allowed to sell take-out orders at any time.

All the restrictions will stand through this week before the government holds a review next week.

Some 900 of the 1,460 Starbucks branches in Korea are in greater Seoul, which includes Seoul, Gyeonggi and Incheon. Starbucks has relied heavily on in-store consumption in the past: only 40 to 50 percent of its revenues in Korea come from takeout. The country’s largest cafe chain by sales does not offer deliveries.

Local coffee chain Ediya Coffee, the largest by number of branches — some 3, 000 branches — is seeing about half its shops affected. Not all Ediya Coffee shops offer deliveries — only about 50 percent do.

The SPC Group’s Paris Baguette chain, on the other hand, is not covered by the restrictions on coffee shop chains. As a bakery chain, it can allow customers to eat and drink coffee until 9 p.m.

The vague definition of franchise is also confusing cafe operators.

“I’m still checking if my cafes are included in the ‘franchise’ category or not,” a person who runs a cafe in Gangneung and a branch in Seoul said. “Although I own a branch in Seoul, there is only one. I’m not sure if this kind of business is considered a franchise or not."

Fast-food chains are also being affected as they have to close by 9 p.m. Many operate around the clock in normal times. But they have also adopted delivery services in the past. In fact, about 50 percent of all fast-food sales in Korea are from delivery orders. 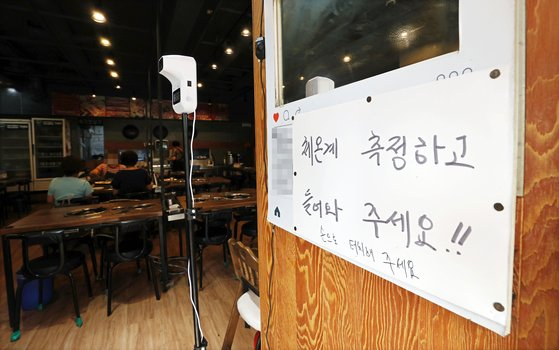 An automatic body temperature thermometer is installed at a restaurant in downtown Seoul on Aug. 28. [YONHAP]

Local restaurants will likely be hit hardest. Of all food and beverage outlets in Korea, only 30 percent offer deliveries, according to the Korea Foodservice Industry Association.


“It is right that [delivery service] has been increasing [in the food and beverage industry], but not that many restaurants are currently offering it,” said a spokesman for the association.

Mr. Park, a 36-year-old who runs a fusion restaurant in Jongno District, central Seoul, is thinking of closing his restaurant temporarily.

“As restaurants have been considered as high-risk businesses after the Covid-19 outbreak, my loan application to commercial banks has been denied,” Park said. “I’m thinking of just shutting down the restaurant [for a while] as closure is actually a better option [in terms of financial losses] for big-sized restaurants.”

Ediya Coffee to open store in Guam in December