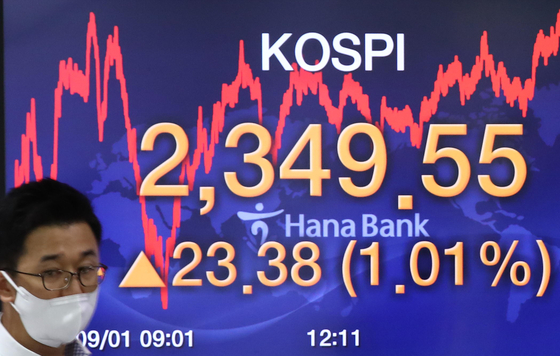 A screen shows the closing figure for the Kospi in a trading room at Hana Bank in Jung District, central Seoul, on Tuesday. [YONHAP]


Shares rebounded Tuesday morning from a decline of over 1 percent the previous session, largely due to investors' hunting for undervalued heavyweights and the government's record budget proposal for next year. The won rose against the dollar.

"Investors seem to have taken on a bargain hunting drive after stocks sank yesterday due to the Morgan Stanley Capital International (MSCI) index rebalancing," said Lee Young-gon, an analyst at Hana Financial Investment.

A recent surge in new Coviid-19 cases, however, still poses a risk for local financial markets.

The country's total caseload surpassed the 20,000 mark for the first time since the country reported its first case on Jan. 20.

The local currency was trading at 1,183 won against the dollar, down 4.8 won from the previous session's close.