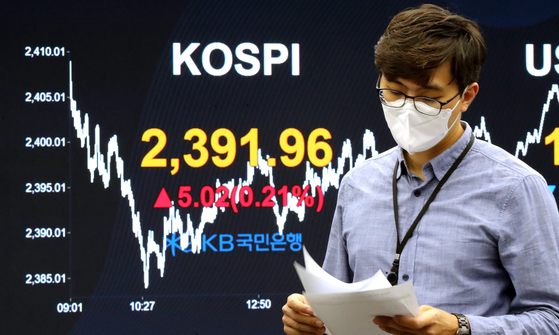 A screen shows the closing figure for the Kospi in a dealing room at KB Kookmin Bank in the financial district of Yeouido, western Seoul, on Thursday. [NEWS 1]


Stocks extended their winning streak to seven straight sessions Thursday, thanks to the massive foreign buying that stemmed from U.S. stimulus hopes. The won rose against the dollar.

Trading volume was moderate at about 939 million shares worth some 12.2 trillion won ($10.6 billion), with gainers outnumbering losers 510 to 300. Foreigners bought a net 756 billion won, the largest daily purchase after July 28.

"The U.S. stimulus for the airline and some other industries led the overnight Wall Street rallies and gave local stocks an uptick," Kiwoom Securities analyst Seo Sang-young said.

Investors' appetite for risk also grew following the release of the Federal Open Market Committee (FOMC) minutes, as some of the committee members implied openness to increasing the asset-buying program to support the pandemic-hit economy.

The local currency closed at 1,153.3 won per dollar, down 4.9 won from the previous session's close.