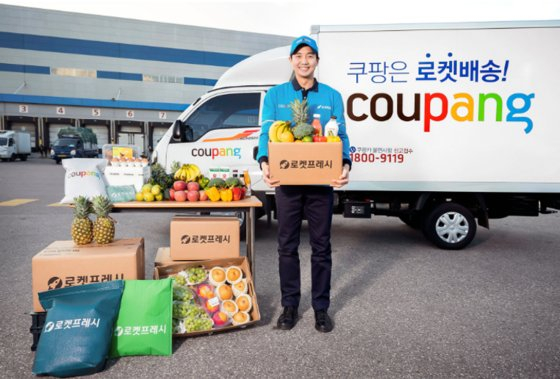 A 34-year-old woman living in Banpo-dong, southern Seoul, recently failed to order fresh food products through SSG.com, the e-commerce arm of Shinsegae Group, due to a shortage of supplies. She tried again through Market Kurly, but faced to the same problem.


“As soon as I chose products and was about to pay through the Market Kurly app, they appeared as ‘out of stock,'” the woman, surnamed Kim, said. “I have to go to the market to get fruit for my children, but there’s no one who can take care of them. I don’t know what to do now.”

After tightened social distancing guidelines were announced last week — stricter versions of the Level 2 guidelines dubbed Level 2.5 — shoppers turned to e-commerce sites to avoid traveling to grocery stores amid a spike in coronavirus cases across Korea.

But with logistics centers also dealing with the coronavirus outbreak and increased social distancing combined with limited produce supplies after the longest rainy season on record and a spike in orders recently, some e-commerce sites are struggling to fulfill all their orders.

Market Kurly on Aug. 30 — the day tightened social distancing measures came into effect — temporarily stopped receiving orders from customers as some products went out of stock.

Customers who visited the website at 5 p.m. on that day had to wait until 11 p.m. to place their order. 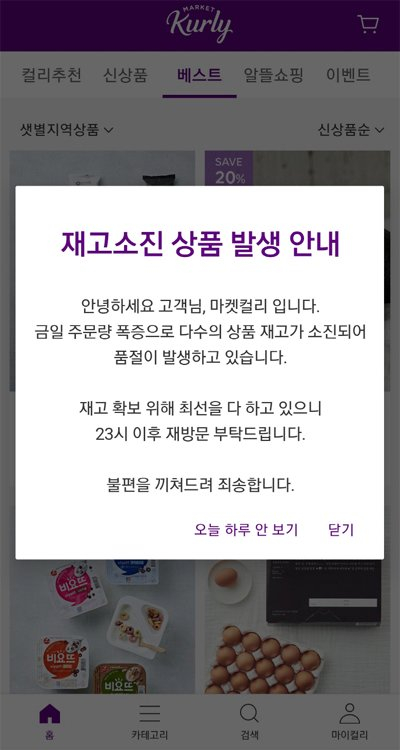 A screen capture of the Market Kurly app at 5 p.m. on Aug. 30 shows that some products are out of stock and suggests customers place orders after 11 p.m. [SCREEN CAPTURE]

“As it was confirmed that an employee at a logistics center had been infected with the virus, there were unexpected delays in the process of delivery,” said a spokesperson for Market Kurly.

Although Market Kurly said everything is back to normal now, some popular items such as tiramisu and cheese cake are still unavailable from its store.

On the same day, food products such as vegetables and meat on Coupang’s Rocket Fresh also sold out.

Hyundai Department Store’s online food mall was forced to stop receiving orders at 4 p.m. on Aug. 30 due to a shortage of products. Normally, customers using the online mall can place orders until 11 p.m. and get deliveries by 7 a.m. the next morning.

“I need to prepare meals for my husband, who has been working at home, and two children who are also staying at home every day,” said a 38-year-old woman surnamed Shin. “Although I spend more than 100,000 won ($85) buying food from Market Kurly and Coupang, it lasts less than two days. I use the online platforms two to three times a week, but the food is all gone so fast.

“One or two delays are understandable. But if this kind of delay occurs more frequently, I have no idea how to prepare meals for my children." 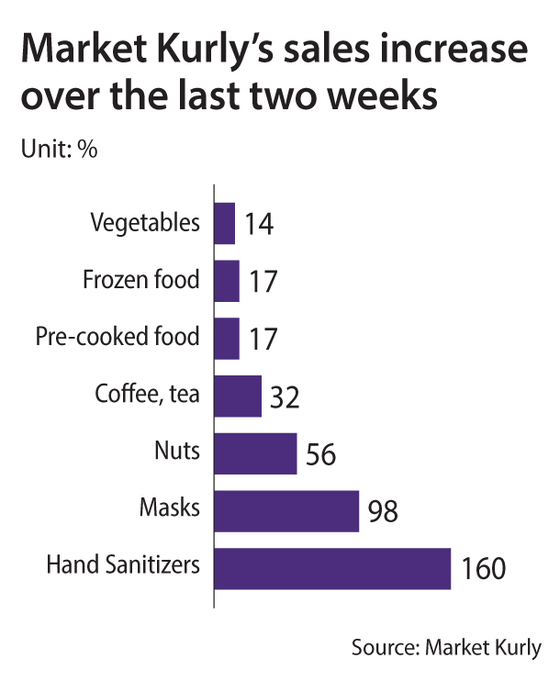 According to Market Kurly, its orders between Aug. 17 to 30 increased 24 percent compared to the previous two weeks — mostly in the greater Seoul area covering Seoul, Gyeonggi and Incheon.

By items, sales of nuts jumped 56 percent while tea and coffee grew 32 percent. Precooked food products, frozen food and vegetables have also seen sales increases of between 14 to 17 percent.

According to data by Statistics Korea and Korea Small Business Institute, the market value of “untact” shopping industries such as e-commerce and TV home shopping in the first half of the year reached an all-time high of 46.21 trillion won, a 19.4 percent increase compared to the same period a year before.

But the shortage on e-commerce websites benefited brick-and-mortar stores. Sales at large supermarkets soared over the weekend thanks to the sudden shortage of products online.

According to Emart, sales of ramyeon, canned food and processed food increased an average of 22 percent over the weekend compared to the same period a week before. Seafood and fruit saw sales increases of 9 to 10 percent, while vegetables saw sales rise 6 to 8 percent.

“Compared to the end of July when the resurgence of the coronavirus paralyzed the country, sales of vegetables [last weekend] jumped up by 36 percent,” said a spokesperson for Emart.