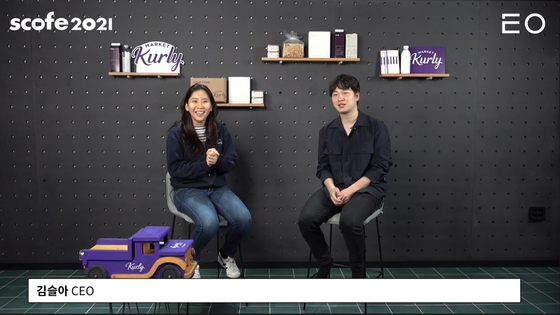 
Market Kurly is holding a sale as its competitors engage in what appears to be a full-scale price war.

The e-commerce operator specializing in groceries announced on Monday it will offer Every Day Low Prices on 60 types of food, including vegetables, fruits, meat and seafood.

Its announcement comes a week after Emart, which operates SSG.com, rolled out a low-price guarantee in which it compensates shoppers if they find a better deal at Coupang, Lotte Mart or Homeplus.

Emart partner Naver is offering fast settlement for merchants, while Coupang earlier this month started free delivery for everyone regardless of the order size and the customer's membership status.

Market Kurly's initiative falls far short of what the competition is offering.

The company, which is planning to go public later this year, only said it would be monitoring prices of others in an effort to offer the best deals. It said it does not have a low-price guarantee, and it declined to detail how it would be responding to the aggressive campaigns being rolled out by larger competitors.

In its announcement, the company said 300 grams of domestic and pesticide-free bean sprouts are priced at 900 won ($0.8), while 1.5 kilograms of apples is priced in the 9,000 won-range.

The company said it plans to expand the Every Day Low Price list to daily necessities, like tissue and toilet paper, as well as household products in the first half of the year.

Barbecue ribs and Ben & Jerry's Ice Cream are being offered for 100 won, and delivery is free depending on the amount spent. The promotion, which is only for new members, runs throughout May 31.

Even these limited efforts indicate a break in strategy, as Market Kurly generally offers premium groceries and relatively high prices. It is making the shift ahead of the expected IPO.

Market Kruly CEO Sophie Kim said the company plans to go public later this year. She did not specify whether it aims to be traded in Korea or in the United States.

The offering would come after a weak listing by Coupang last month in New York, in which the stock traded down from its opening price and hasn't recovered.

Prepping homemakers take us to brink of 'delivery chaos'