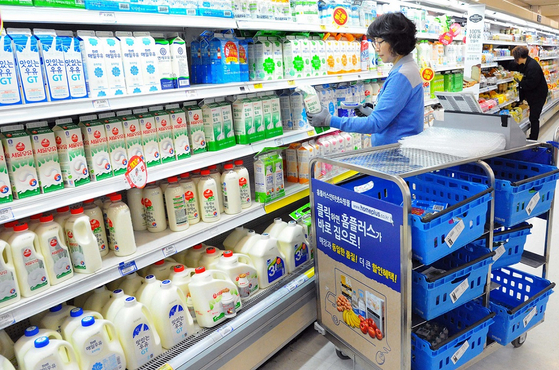 
Homeplus hopes to generate 2.4 trillion won ($2.14 billion) in annual revenue from online sales in three years, the company said on Thursday, and remain profitable doing so.

It estimates online sales from March last year through February totaled about around 1 trillion won.

Homeplus started delivering groceries to online shoppers in 2002, but was not able to achieves much of an influence in the market.

Instead of constructing distribution centers, which require huge investment, Homeplus will strengthen its use of its offline stores to expand the online business.

It plans to gain competitiveness in short-distance delivery by making use of its offline stores.

The retailer has 139 offline stores, the largest most the three major discount mart operators – Emart, Lotte Mart and Homeplus – according to a spokesperson for Homeplus. It also has Homeplus Express locations.

The retailer’s ambition also includes focusing on same-day delivery, instead of the dawn delivery service provided by most e-commerce operators, to target office workers who place orders on their way to or back from work and receive the order when they arrive home.

“Unlike the existing e-commerce operators that expand in transactions amount and generate millions won of losses, [Homeplus] goal is to continue reporting operating profit from online sales while expanding business through efficient investment operations,” said a spokesperson for Homeplus.