Three is not a crowd in these friends' new home

Three is not a crowd in these friends' new home 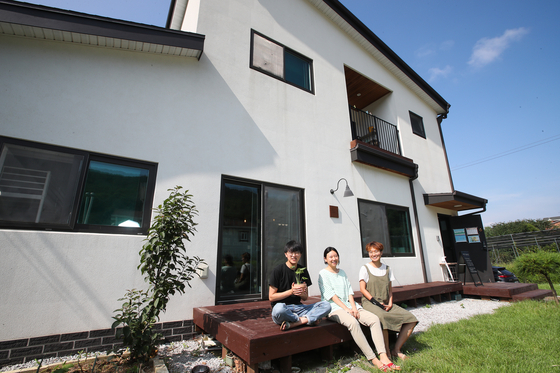 Three friends, from left, Ahn Byeong-il, Kim Min-jeong and Cho Eun-seon, moved to Ganghwa Island, Incheon in March after they built a house together on the island. [WOO SANG-JO]


Real estate prices in Korea are setting records high every day as if the sky is the limit. So it comes as no surprise that the housing instability issue is deepening concerns of young generations, even leading to the coining of some new words like youngkkul, an abbreviation of younghon (soul) and kkeul-eo-mo-eu-da (to gather), meaning one needs to collect everything he or she has, even their soul, to buy a house in times like this.


The housing issue has changed many facets of society and has even led to some defying social norms. Traditionally, only those who are blood related or in a serious romantic relationship build a house and reside together. But that is beginning to change.

Cho Eun-seon, Kim Min-jeong and Ahn Byeong-il, all in their 30s, left behind their city lives and settled down in Ganghwa Island, Incheon to build a two-story house.

Ahn and Cho are married and Kim graduated from the same college as Cho. But the three of them are close enough to go on trips and run a podcast themed on books. They have similar interests and philosophies in life so they began thinking about living together under the same roof some time ago. Eventually, the three decided to build a house on the edge of Mount Jeongjok, near Jeondeungsa Temple.

The three friends used to visit the mountain frequently and knew the area well, so they opted for the location because it is in close proximity to their favorite hangout destination, Ladle and Rice Scoop, a small bookstore.

The three friends’ house is located in the middle of nature. They dwell on the second floor of the house while the first floor is used as a bookstore. An attic is available to rent as an Airbnb for those looking for a getaway that involves curling up with a pile of books.

The house is compact and simple but is filled with amenities such as a small veggie garden and a backyard dotted with green grass.

When asked the total construction cost for the house, Ahn groaned. “People don’t ask us why we built this house. Instead, they ask us how much we spent on it,” said Ahn. 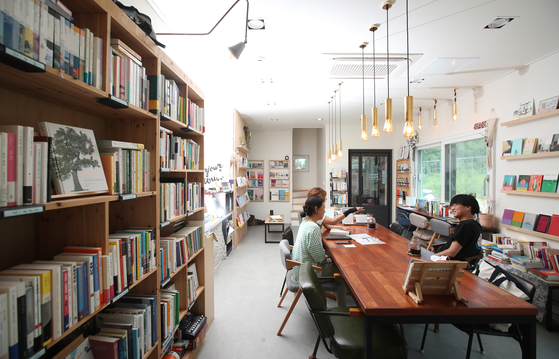 A bookstore is located on the first floor of the three friends’ house. [WOO SANG-JO]


The three friends wanted to avoid such conversations, thus they published a book, the name of which translates as “Three of Us Build a House.” Every small detail of the construction procedure is elaborated in the book.

It was an onerous journey for the three ordinary young folks to build the house. Both Ahn and Cho had a budget of 75 million won ($63,408) while Kim had 50 million won. They covered the rest of the construction costs by getting loans from the bank. They shelled out 260 million won for construction and 121 million won to purchase the plot of the land.

Ever since they purchased the land in 2016, the three said they took out all kinds of loans to complete the house.

It took two years to initiate the construction from the initial purchase of the land. When the construction was nearing its end, the three had nowhere to go so they stayed at Ladle and Rice Scoop.

Cho, Kim and Ahn, who — between them — have moved a total of 48 times, have finally taken root.

Since college, Kim has made a habit of moving whenever she was feeling down.

Meanwhile, Cho always dreamed of living in a sun-filled house because she always lived in dark and damp rooms due to her small budget for rent. Ahn moved frequently thanks to his soldier father who regularly relocated. Because of that he “wanted to settle down in a comfortable and cozy house.”

While they used to have different ideals for a house, they all had a clear reason for cohabitation. 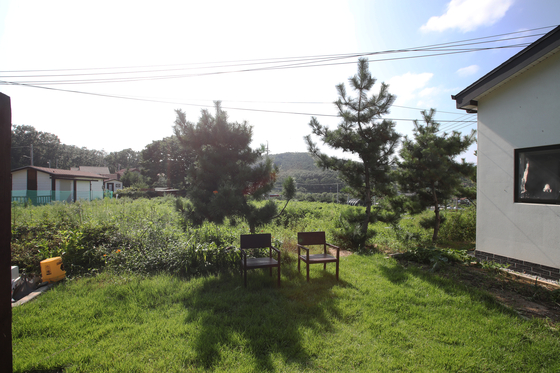 The three friends plant the lawn and trees by themselves in the backyard. [WOO SANG-JO]


Kim said, “It was hard to live alone, so I always dreamed of living together [with somebody].” She added, “Whenever I go through some depressing social accidents such as the sinking of the Sewol ferry, I needed a house where I can feel the warmth of other people, not a house that is located close to subway and bus stations.”

Cho and Kim teach at nearby elementary schools in Ganghwa Island while Ahn, who used to be a newspaper reporter, now runs the bookstore located on the first floor of their house. He also works as a manager for the accommodation.

The three distribute all the house chores and when no one feels like cooking they simply dine out.
When asked the biggest difference before and after they built the house, Ahn said, “I live every day with my will and decision.”

Ahn said his life has become a lot more self-directed than before. 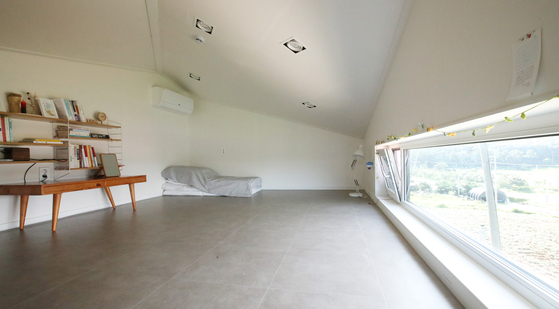 The attic is used for Airbnb accommodation. [WOO SANG-JO]


“Before I started taking care of this garden, I never knew a 66-square-meter [710-square-feet] of land was so huge. When I see the weeds grow in the garden, I feel guilty that I didn’t do what I had to do on time,” said Ahn.

Cho said she feels the difference from the amount of sunlight she gets at the house. “I couldn’t estimate the time without clocks before because all my previous rooms didn’t have good sunlight.”

She added that she also became a knitting expert since moving to the island. “I used to wait for the weekend to come when I was living in the city, but I can live every day to the fullest as I enjoy things I love.”

For Kim, her everyday commute time was her least favorite part of the day when she lived in a city. “I was swept by this huge crowd [on my way to work] but now I love my journey to work.” She added she now “eats healthier food” instead of ordering delivery options. About 20 types of vegetables from potatoes to cabbages are grown in their garden.

It’s not always easy to share a house with somebody, though. But whenever they face conflicts, they “try to have enough me time.”

“We live together but each person’s private time is the top priority,” the three said in unison.