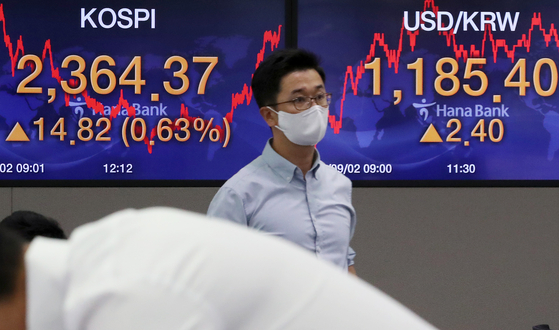 A screen shows the closing figure for the Kospi in a trading room at Hana Bank in Jung District, central Seoul, on Wednesday. [NEWS1]


Stocks extended their winning streak to a second consecutive session Wednesday as retail investors scooped up stocks as the speed of new Covid-19 infections decreased. The won fell against the dollar.

"Korean stocks traded near the 2,370 level on the back of robust U.S. data on manufacturing activity and Wall Street gains. But foreigners' net sales sent the Kospi into negative terrain at one point," Lee Kyung-min, a market analyst at Daishin Securities said.

Seoul shares got off to a strong start following overnight gains in U.S. markets, prompted by tech rallies and improving economic data.

In the morning session, the stock index pared earlier gains, but retail investors' sustained buying supported the market in the afternoon trade.

Individual investors snapped up a net 332.8 billion won. But foreigners unloaded a net 262.5 billion won and institutions sold more shares than they bought at 91.1 billion won.

Korea's daily coronavirus cases stayed below 300 for the fourth straight day Wednesday after the country recently imposed stricter social distancing across the nation.

Samsung Electronics gained 0.37 percent to 54,400 won despite the news that prosecutors indicted Vice Chairman Lee Jae-yong on Tuesday for his role in a controversial merger and alleged accounting fraud.

The local currency closed at 1,185.40 won against the dollar, up 2.4 won from the previous session.