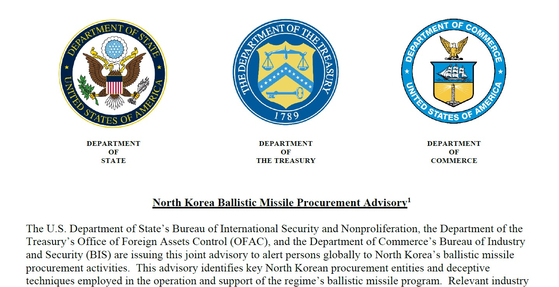 
The United States issued an advisory Tuesday warning that those who aid North Korea’s procurement of equipment and materials for its nuclear and missile development programs, even inadvertently, could face United Nations and U.S. sanctions.

North Korea's procurement activities could extend to the electronics, chemical, metals and materials industries, as well as the financial, transportation and logistics sectors, it added.

“Industry is on the front line of detecting and thwarting North Korea’s procurement attempts,” the advisory read. It added that it is “critical” that private sector companies and individuals are aware of key items needed for the North Korean weapons programs, the regime’s tactics and the risks and potential consequences of engaging, whether or not intentionally, in its ballistic missile-related procurement.

The U.S. Treasury and State Department has designated dozens of entities and individuals associated with North Korea’s ballistic missile and weapons of mass destruction programs, including those based in third countries, it noted, referring to so-called secondary boycotts.

It urged relevant industry stakeholders in the United States and abroad to be “particularly vigilant regarding any involvement in the transfer of sensitive technology to North Korean entities or individuals linked to ballistic missile programs of concern to the United States and the UN, particularly through third parties that conceal their North Korean relationships, affiliations, or end-users.”

“North Korea’s continued efforts to expand its ballistic missile capabilities pose a significant threat to both regional and global stability,” the U.S. State Department spokesperson said in a statement Tuesday. “In 2017, North Korea conducted its inaugural tests of intercontinental ballistic missile systems, and, over the past year, has continued to test launch ballistic missiles,” which is in violation of UN Security Council resolutions.

North Korea conducted its sixth nuclear test in September 2017 and last launched an intercontinental ballistic missile (ICBM) in November of that year. In the spirit of denuclearization negotiations with Washington, Pyongyang has suspended nuclear and long-range missile testing since 2018. However, following the collapse of the second North-U.S. summit in Hanoi, Vietnam, in February 2019, after the two sides couldn’t find a compromise on sanctions relief and the scope of denuclearization, Pyongyang has been hinting that it may take a different path — and of possible dire consequences.

North Korean leader Kim Jong-un in December 2019 warned that Pyongyang no longer felt bound by its self-imposed moratorium on testing nuclear weapons and long-range ballistic missiles, and indicated that it could test a new strategic weapon in the near future.

North Korea is likely to attempt to import for its ballistic missile program multi-axle heavy vehicles, such as 8- or 9-axle forestry vehicles, to be used as transporter erector launchers (TEL), the advisory also noted.

When North Korea launched its two ICBMs in July 2017, and later in Nov. 19 of that year, the missiles were transported on TELs to test sites and launched from separate launch pads. Missiles fired directly from TELs can pose a greater threat, as they are mobile and harder to detect.

On April 15, the State, Homeland Security and Treasury departments issued an advisory to raise the awareness of the cyber threat posed by North Korea. But this is the first time multiple U.S. agencies issued such an advisory over ballistic missiles procurement.

The advisory on North Korea comes just over two months ahead of the U.S. presidential election.

Amid an impasse in denuclearization negotiations since last year, U.S. analysts have speculated on the possibility of a so-called October surprise, which could involve some sort of resumption of dialogue with North Korea or even a third summit between Kim and Trump.

U.S. Secretary of State Mike Pompeo in remarks at the Republican National Convention on Aug. 25 said that U.S. President Donald Trump “lowered the temperature and, against all odds, got the North Korean leadership to the table." He added that there were “no nuclear tests, no long-range missile tests.”

But some experts see the latest advisory as indicative of the United States' determination to adhere to stringent sanctions on North Korea, leaving little room for flexibility to resume dialogue with Pyongyang before the elections.

In a statement, Seoul’s Ministry of Foreign Affairs said the two envoys agree that the resumption of negotiations between the United States and North Korea “is crucial in order to make substantive progress toward complete denuclearization and the establishment of permanent peace on the Korean Peninsula,” and that they “discussed the conditions and the ways to work together to that end.”