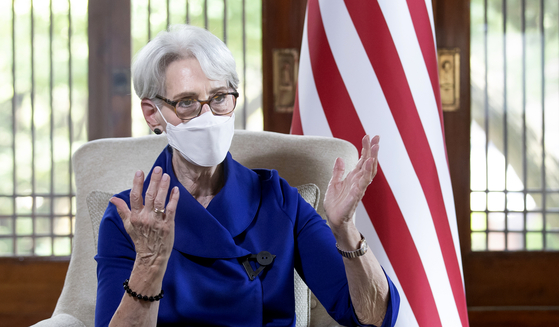 U.S. Deputy Secretary of State Wendy Sherman sits for an interview with the JoongAng Ilbo Friday at the U.S. ambassador’s residence in central Seoul. [LIM HYUN-DONG]


U.S. Deputy Secretary of State Wendy Sherman evaded answering whether Washington will provide any incentives to get Pyongyang to return to the negotiation table during her visit to Seoul last week.

Sherman in an interview with the JoongAng Ilbo conducted Friday said on North Korea, “I hope they respond to a very sincere gesture by the United States to be open to dialogue without any preconditions.”

However, she acknowledged it “may take them a little bit of time to respond” because North Korea, like the rest of the world, is “dealing with the Covid-19 pandemic, probably with fewer resources than we have, or the ROK [Republic of Korea] has.”

She had been asked what it may take for Pyongyang to come out of its self-isolation amid a standstill in denuclearization negotiations since 2019.

On what it would take for the Joe Biden administration to consider any sanctions relief for the North, Sherman replied, “The reason that we have been open to dialogue is because we think we need to get in a room with each other and to begin negotiations. And if their interest is to get sanctions relief, then they know that we need to begin down the road to the full denuclearization of the Korean Peninsula. So I don't think there's any mystery about what has to happen here.”

She visited Seoul from Wednesday to Friday and was asked several times by reporters if the United States has any concrete plans or incentives to get North Korea to return to dialogue.

Responding to such questions, Sherman told reporters after talks with Choi at Seoul’s Ministry of Foreign Affairs Friday that she looks forward to a “reliable, predictable and constructive way forward” with Pyongyang.

President Moon Jae-in also met with Sherman Thursday and the two discussed “dialogue and diplomacy for the complete denuclearization of the Korean Peninsula,” said the Blue House.

Diplomatic observers point out that her remarks could indicate that the United States will not reward North Korea just for showing up at the dialogue table. This follows its policy not to hold talks just for the sake of talks. 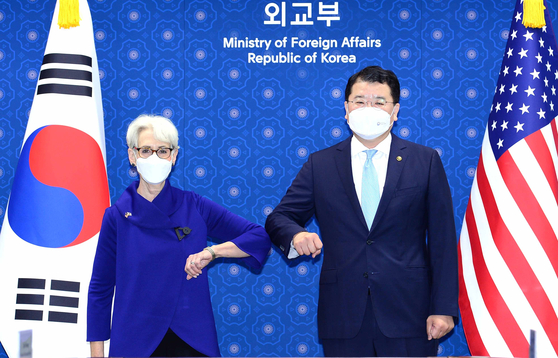 Sherman told the JoongAng Ilbo in the interview conducted at the U.S ambassador's residence in central Seoul Friday that the Biden administration’s approach can be differentiated from the Barack Obama government’s policy of strategic patience.

Sherman said, “I think that this is a different policy that was constructed with the ROK, in close consultation with Japan. It is meant to be a reliable, predictable way forward to begin dialogue and negotiations with North Korea. And we are, shoulder to shoulder in our approach.”

She added that the complete dismantlement of North Korea’s key Yongbyon nuclear complex “would be a good thing.”

Addressing concerns here that North Korea and the United States could reach some sort of small deal that could alienate South Korea, she replied, “We are all democracies. We are very transparent with each other, and that will be the case here.”

On how long Washington will wait for Pyongyang to respond to its diplomatic gestures, Sherman replied, “Americans like to do things very quickly. Not every culture is as fast-paced as America sometimes is. So I don't think we've reached a time where we're out of time.”

But she added, “I hope that they respond soon.”

On alliance matters, she said on the May summit between Moon and Biden, “We are bilateral partners, we are regional partners, and we are global partners. And it really underscored how much we do together [...] I think what you saw out of that summit was two leaders of two extraordinary countries working together to make the world a safe, prosperous and stable place.”

Addressing South Korea’s position amid complex Sino-U.S. relations, Sherman said, “Korea is a sovereign country, with its own interests, and we work together to deal with issues that arise of common concern. We are two democracies, who share the same, very deep values for freedom and a rules-based order.”

Sherman traveled to Ulaanbaatar Friday. She will visit Tianjin Sunday and Monday to meet with Chinese Foreign Minister Wang Yi and other officials.