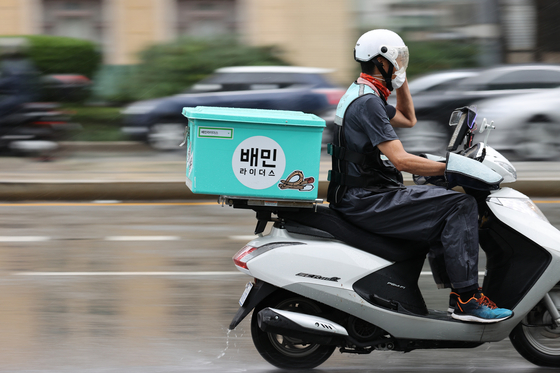 A rider delivering food in central Seoul on Wednesday. Food delivery went up due to the coronavirus, which contributed to an all-time record online purchase in July. [YONHAP]


Online shopping in Korea hit record levels in July, and another record is expected in August as an increase in Covid-19 cases in Seoul has driven more people to buy products on the internet.

According to Statistics Korea on Thursday, online shopping in July totaled 12.96 trillion won ($10.9 billion), a 15.8 percent increase year-on-year. That is the highest level since the data were first compiled in 2001.

Mobile shopping grew 21.2 percent to 8.78 trillion won, also a new record since the statistics agency began keeping track of the figure in 2013. Mobile shopping now accounts for 68 percent of all online shopping. That’s 3.1 percentage points higher than a year ago.

At the current rate, online shopping is likely to break 13 trillion won in August.

Food services, which include delivery, went up 66.3 percent to 1.38 trillion won.

Orders dropped in a number of categories. Transportation service purchases declined 52 percent to 777.9 billion won as fewer people flew due to the pandemic. Purchases of culture and leisure services dropped 67.8 percent to 63 billion won.