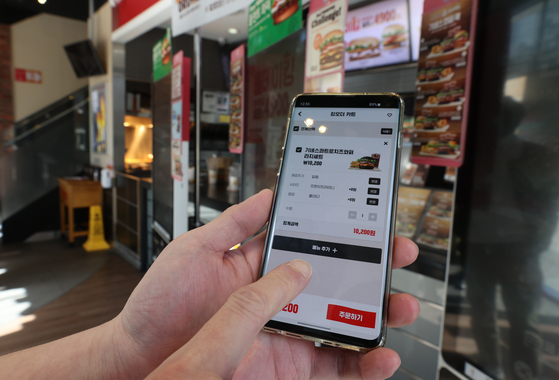 Online shopping, especially purchases made via smartphone, increased sharply in the third quarter due in part to social-distancing measures. [YONHAP]

In the third quarter, online shopping totaled 48.2 trillion won ($41 billion), up 19.6 percent on year, according to Statistics Korea.

That's the highest total since the number was first compiled in 2001.

Of the purchases, 73 percent were made using mobile devices, and those purchases were up 26.9 percent on year.

Mobile was 72.4 percent of the figure, up from 68.4 percent in the same month a year earlier.

The majority of the online spending online was on food delivery, which came to nearly 7 trillion won in the third quarter, up 50 percent, the fastest increase of all categories.

Food deliveries were 14.5 percent of all online purchases, and more than 98 percent of those purchases were made via mobile devices.

Mobile food delivery orders increased 53.7 percent year-on-year and accounted for 19.5 percent of all purchases made from mobile devices.

Food and beverage purchases totaled 6.4 trillion won in the third quarter, up 22.4 percent, while orders of fresh produce, meat and fishery goods came to 2.1 trillion won, up 22 percent.

Chuseok holidays may also have contributed to the increase of online food deliveries and grocery purchases.

In the third quarter, 2.1 trillion won of computer and computer-related products were sold online, up 20.2 percent year-on-year.

One claimed that once the restrictions are lifted, many customers will be eating out instead of ordering at home. Another said that his business before restrictions were lifted made 1 million won a day from food delivery. That figure has dropped to 180,000 won.