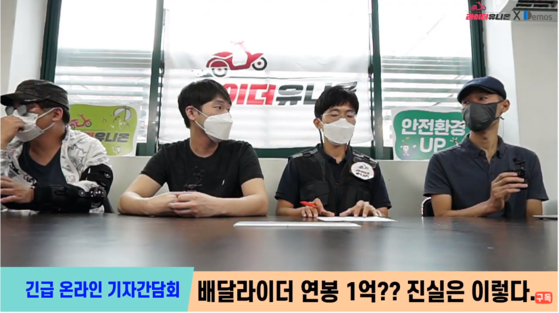 
Rider Union held an online press event to argue that recent reports claiming that delivery drivers are highly paid are untrue, adding that their working environment still needs to be improved as it remains a dangerous job.

The 100-million-won claims surfaced after Coupang Eats, a food delivery platform, revealed that one of its riders earned 585,700 won in a single day after delivering 64 orders, according to Rider Union.

If that was taken as a daily wage — which, Rider Union says, it was never intended to — that person would earn more than 100 million won a year. But that sort of pace isn't actually possible.


“Coupang calculated the daily pay of delivery workers that worked on the weekend on a rainy day, when they receive higher pay” said Park Jung-hoon, a chairperson at Rider Union. “Delivery workers’ payments aren’t stable, and it’s inaccurate to calculate one’s annual salary based on one day.”

Park also blamed major companies, like Coupang and Baedal Minjok, or Baemin, for the current lack of supply of delivery workers.

“Commission fees per delivery have risen because Coupang Eats and Baemin are promoting events to lure in more delivery workers. That promotion is only possible for those with major delivery platforms," Park said, adding that such a promotion is taking away delivery riders from smaller companies like Vroong and Barogo.

Citing a lack of delivery workers due to skyrocketing orders, Logiall, which handles more than 10 million orders per month, recently told restaurant owners that commission fees will increase by 500 won. The increase goes to delivery riders.

Franchise restaurants’ use of delivery services is also intensifying the competition.

“Amid the prolonged Covid-19 pandemic, delivery services are essential for the [economy] of Seoul, which is home to 10 million people,” said Gu Gyo-hyeon, a spokesperson for Rider Union. “There is a need to fundamentally change the working environment of delivery riders.”