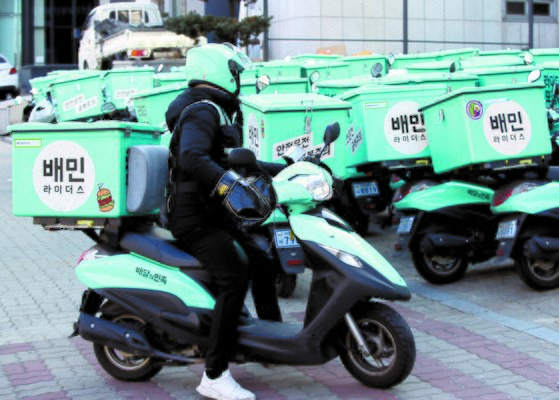 
It's been a decade since the first food delivery platform started up. It was an idea made for Korea and Koreans. Now, the biggest constraint to growth in the industry is not customers or food — but delivery drivers.

After Baedal Minjok, more commonly known as Baemin, started in 2010, Yogiyo and FoodFly began in 2011, and Ddingdong a year later. Siksin Hero followed in 2016, and Uber Eats the next year. E-commerce operator Coupang came up with its food delivery service app Coupang Eats two years later, and WeMakePrice introduced WeMakePrice O. Local governments including the Seoul Metropolitan Government and Gyeonggi Provincial Government are working on developing their own public delivery service apps.


After the Covid-19 outbreak made home meal deliveries an even more important life service, the industry finally hit a wall: a systemic shortage of delivery drivers.

In a bid to recruit more delivery drivers, Coupang Eats recently introduced a system in which drivers deliver a single order and take home more pay. In general, Coupang drivers earn 5,000 won ($4) to 7,000 won per order and the amount can be much more in severe weather conditions or during rush hour. As drivers can earn more, they tend to avoid orders from other platforms and wait for orders from Coupang Eats.

As a counterattack, Baemin recently started to offer an extra 70,000 won to drivers who deliver more than 20 orders in a week. Baemin drivers generally get 3,000 won to 4,000 won per order.

Baemin, which has about 2,100 delivery riders, wants to hire an additional 1,000 riders by the end of the year.

Yogiyo, which pays 5,000 won per order, raised the amount to 6,000 to 8,000 won for orders in some areas including Gangnam and Seocho districts in southern Seoul.

“While we are suffering from a shortage of delivery riders, we decided to pay more in an attempt to attract more,” said a spokesperson from Yogiyo.

Aside from deliveries, the platforms also have to compete to attract restaurants, and they do that by cutting the fees charged.

Coupang Eats is running a promotion in which it charges a flat 1,000 won per order regardless of the total cost of the food. The promotion, which was supposed to run until the end of the June, has been extended indefinitely. Coupang Eats originally charged a 15 percent commission fee to restaurants.

Meanwhile, some corporate giants have zeroed in on the business.

The number of orders Naver received increased tenfold in the second quarter of the year compared to the same period a year earlier, though the company wouldn't give specific figures.

Rival Kakao has also been expanding its food ordering business that allows KakaoTalk users to order food from registered restaurants. A total of 20,000 restaurants including 50 fast food branches were registered in KakaoTalk’s ordering service as of the first half of the year.

The delivery business is also getting competitive in non-food segments.

After Coupang expanded its business to the food sector with the introduction of Coupang Eats, Yogiyo signed a partnership with BGF Retail, operator of the CU convenience store chain, to start deliveries of convenience store products. Baemin also started its B Mart service, which delivers a diverse range of groceries including home meal replacements.

“Retailers and giant e-commerce operators’ entrance to the delivery service market is a natural evolution considering recent changes in consumer patterns,” Seo Yong-gu, a professor of business administration at Sookmyung Women’s University, said. “A new competition has been started in [the delivery service industry] in which the real competitiveness comes from quality of service, not popularity or price.”