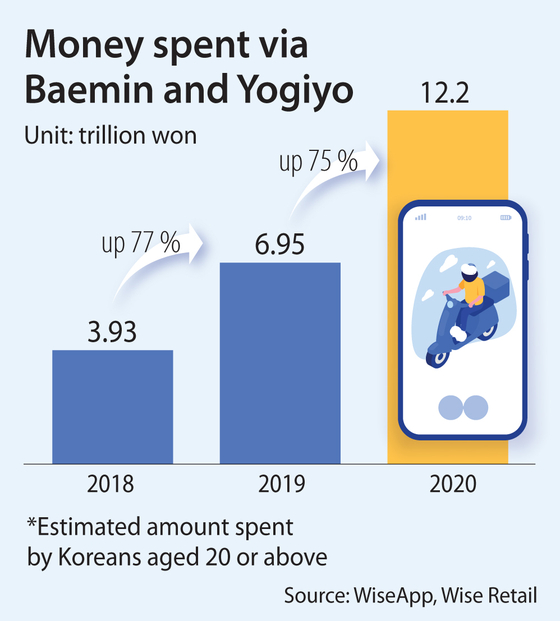 The result came after the two companies analyzed the total money spent by Koreans aged 20 or above via two dominant delivery apps in Korea — Baedal Minjok and Yogiyo.

The combined market share of Baedal Minjok and Yogiyo in the delivery app industry is estimated at about 99.2 percent as of 2019, according to the Fair Trade Commission.

In December alone, Koreans spent some 1.44 trillion won via the apps. It marks the highest figure for any December.

But WiseApp also explained that the actual amount of money spent on food deliveries would be higher than that.

“The data doesn’t include the orders made by people in their 10s, as well as orders made via phone calls, visits and other small- and mid-sized delivery apps such as Coupang Eats and KakaoTalk ordering service,” WiseApp explained. “When combining all, the total amount of money spent in the food delivery market would be much higher than 12.2 trillion won."

As of December 2020, the number of Baemin users reached 13.7 million, while users of Yogiyo totaled 7.17 million and Coupang Eats users hit 2.58 million. Those are the highest figures for all the three apps.