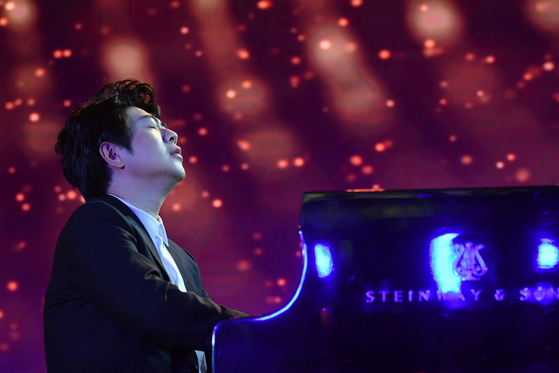 Chinese pianist Lang Lang performs during a ceremony marking the release of his new album of studio recordings and live performances of Johann Sebastian Bach's Goldberg Variations in Beijing on Sept. 4. [AFP/YONHAP]


In times of crisis star Chinese pianist Lang Lang believes music is the best medicine, especially Bach, who he says penned the perfect soundtrack for these pandemic-troubled times more than 250 years ago.

The globe-trotting performer, born in northeastern Shenyang in 1982, became famous playing the great romantic composers and has been "keeping his hands warm" returning to them in recent months.

But mastery of Bach has been the quest of a lifetime, he says.

"Music is a good remedy in these particular times," he told AFP ahead of the release of his version of the Goldberg Variations on Friday.

"Bach, if we compare him to other great composers, has an even greater healing power."

To tackle the "Variations" — one of the most difficult pieces in Bach's repertoire due to its great variety of styles — Lang Lang drew deep into his past.

The pianist played the 30 Variations "at the age of 10" and knew them entirely by heart seven years later.

"Memorising them wasn't that hard, because I started early."

"I have been waiting to really get to know the piece better."

With the live entertainment world thrown into disarray by the virus, Lang Lang — a prolific performer who used to give at least 90 concerts a year before the pandemic — says he has missed playing in front of audiences.

"What I missed the most is the stage," said Lang Lang, adding that he hoped a medical breakthrough could help end the disruption.

He has not been entirely absent from his audiences. In April he accompanied Celine Dion, Lady Gaga, Andrea Bocelli and John Legend in a virtual concert celebrating health workers.

And despite his renown on the piano, he said he would not force his children into learning — unlike thousands of Chinese parents whose children learn from a young age.

"If he or she wants to be a pianist, then they have to work, and I don't know if I'll be pushing or not," he said. "Certainly I don't want to have a very tough time with my kids."

But, he acknowledged, "you have to work hard, there is no way to escape".

The album, distributed by Deutsche Grammophon, contains a studio version and a concert version, recorded in March at St. Thomas Church in Leipzig, where Johann Sebastian Bach is buried.