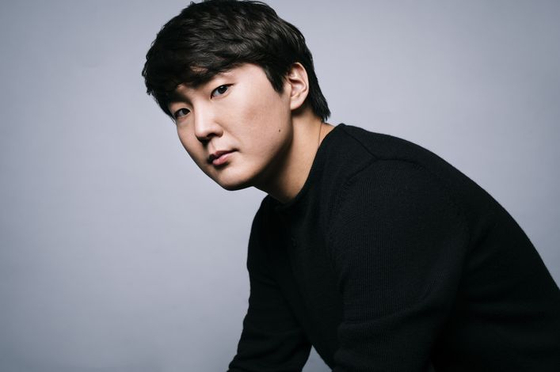 
Korea’s star pianist Cho Seong-jin will give a world premiere of Mozart’s recently discovered piano piece, “Allegro in D K626b/16” at the Great Hall of the Salzburg Mozarteum Foundation at 6 p.m. on Jan. 27, which is 2 a.m. on Jan. 28, Korea time.

According to the Salzburg Mozarteum Foundation, this new 94-second score is preserved on both sides of a single manuscript and is presumed to date back to early 1773. It is believed to have been completed toward the end of the 17-year-old composer’s third tour of Italy or soon after his return home to Salzburg.

The score appears to have passed from the estate of Mozart’s youngest son into the collection of Austrian civil servant and amateur musician Aloys Fuchs and was then given away by mistake. In 2018, the foundation offered to purchase this unknown score, which was later confirmed to be Mozart’s, from a French-Dutch engineer who had bought the manuscript from a dealer in Paris in the late 1920s.

Along with the new piece, Cho will perform other Mozart pieces including “Sonata in F K.332,” “Pimpinella K. 33b” and “Allegro in C.”

The concert has been organized to mark the 265th anniversary of Mozart’s birth and to open the 2021 Mozartwoche Festival. The concert will be streamed on Deutsche Grammophon’s YouTube channel as well as on the Mozarteum’s social media channels. In Korea, LG U+ will stream the performance as well. 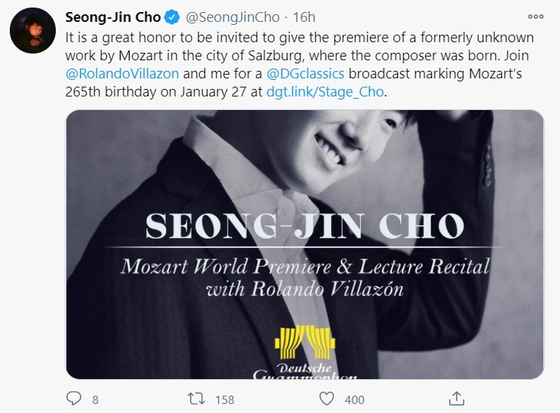 
The annual Mozartwoche was canceled this year following the Austrian government’s announcement of a third national lockdown in December. It was redesigned as an abbreviated program for online streaming.

“The world premiere of 'Allegro in D' is the icing on the birthday cake for our beloved Mozart. I am thrilled it will be presented by the outstanding pianist Cho Seong-jin, who has such a marvelous feeling for the tender humanity of Mozart’s melodies,” said Rolando Villazon, artistic director of the Mozartwoche in a statement. “Mozart’s music brings us solace in difficult times and is the shining light that lets us look forward to the time when audiences and performers will be able to meet again.”