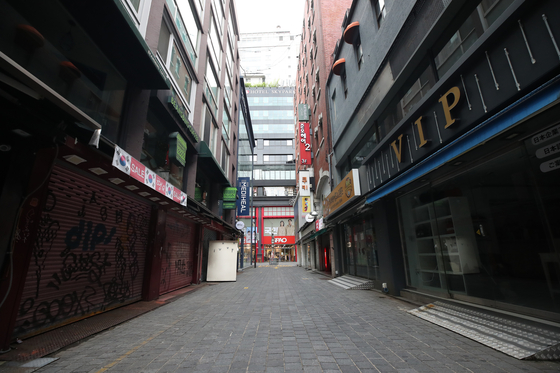 Shops' shutters are closed in the once-popular tourist destination in Myeong-dong, central Seoul, on Aug. 31 as many of the small businesses are struggling to make ends meet amid the resurgence of the coronavirus. [YONHAP]


Small businesses are being devastated by the pandemic, with the mom-and-pops, restaurants, travel agencies and similar establishments going out of business at a rapid rate, according to recent statistics.

The situation is set to worsen as the government over the weekend has extended the social distancing orders that have hit food-and-beverage outlets especially hard.

Many small businesses were already on the ropes before the pandemic, and the crisis has made an already bad situation worse. Owners are becoming desperate, with at least one suicide being reported related to the financial stress faced by a small business operator.

The number of small shops in Seoul dropped 5.4 percent in the second quarter when compared to the first quarter, according to a report by Budongsan 114 based on a study by the Small Enterprise and Market Service (Semas). The total reported was 370,321, meaning 21,178 small stores that existed at the beginning of the year are now gone.

Over the same period, 10,040 restaurants went out of businesses, a 7.5 percent decline on quarter. The number of hair salons dropped by 3,473 stores, a 5.1 percent decline. In the travel agency, leisure and entertainment — which includes noraebang, or singing rooms — and computer cafe category, 1,260 businesses shut for good, a 10.8 percent decline.

The Korea Development Institute (KDI) believes that the recent resurgence of the virus in Korea will lead to more economic troubles down the road.

In a report, the state-financed think tank said prior to August the situation was starting to improve, but due to the rise in new daily case numbers in August and the implementation of enhanced social distancing measures, services are likely to face significant challenges.

The KDI said that many business run by the self-employed are on the verge of failure, so another round of emergency relief grants needs to be disbursed immediately.

The Blue House, the government and the ruling Democratic Party on Sunday agreed on a 7-trillion-won ($5.9-billion) fourth supplementary budget. It will include a round of emergency relief that will be provided to businesses run by the self-employed, lower income households and the unemployed.

Freelancers, including door-to-door sales people, are also expected to receive the grants.

The goal is to disburse the funds before the Chuseok holidays, which start at the end of this month.

The first emergency relief grants where distributed in May to every Korean household, which received between 400,000 won and 1 million won in one-time support.

Although the details have not been disclosed, it has been reported that the government is looking into granting up to 2 million won to the self-employed and small business owners.