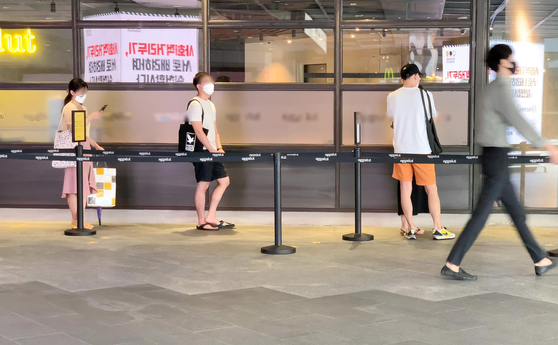 Customers keep a distance while waiting for a seat at a restaurant in Seoul on Monday. As the number of new cases continues to remain above 200, stricter social distancing regulations have been implemented. [YONHAP]


A rebound in the economy glimpsed in June turned out to be a mirage as Korean households burned through the government’s emergency relief grant stimulus money.

According to Statistics Korea on Monday, industrial output, spending and even investment either slowed down or shrank in July.

Overall industrial output, which grew 0.7 percent in June on year, declined 1.6 percent in July. On a month-on-month basis, it grew only 0.1 percent, a sharp slowdown from a 4.1 percent increase in June.

The mining and manufacturing sector saw a 2.5 percent drop in July compared to a year earlier, an acceleration of the 0.5 percent decline in June. On month, the sector's growth slowed to 1.6 percent, down from a 7.2 percent increase in June.

Semiconductors continued to enjoy robust growth of 17.2 percent compared to a year earlier, while automobile production fell 9.3 percent. Electronic parts were the biggest drag for manufacturing output, as they fell 18 percent on year.

In services, the impact of Covid-19 was particularly felt.

Revenues for services were down 1.3 percent year-on-year, much sharper than June’s 0.1 percent decline. Month-on-month, growth slowed from 2.2 percent in June to 0.3 percent in July.

In the arts, sports and leisure businesses, revenue shrunk 29.8 percent compared to a year earlier. Those businesses have seen double-digit declines since February, when the coronavirus started to spread.

A notable change was seen in consumer spending.

Consumer spending only grew 0.5 percent in July compared to a year earlier, a sharp drop from the 6.3 percent increase registered in June.

On a month-on-month basis, consumer spending shrunk 6 percent, a turnaround from a 2.3 percent increase in June.

“Spending shrunk 6 percent month-on-month [in July] as the effects of government policies including the discount on the individual consumption tax [on purchasing new vehicles] have been reduced,” Ahn Hyung-joon, Statistics Korea's deputy director-general on short-term economics, said. "Due to the unprecedented long rainy season, purchases of air conditioners and other cooling products have declined.

A big boost to the economy came in May, when emergency relief grants were given to every Korean household. They amounted to 400,000 won ($340) for single people and up to as much as 1 million won.

According to the statistics agency, 90 percent of the relief grants were spent between May and June, contributing to the 6.3 percent year-on-year increase in consumer spending in June.

The resurgence of the coronavirus since mid-August has dampened optimism over an economic rebound in the third quarter.

The Bank of Korea further lowered its growth projection for this year from negative 0.2 percent to negative 1.3 percent. That would be the sharpest decline in two decades.

On Friday, Finance Minister Hong Nam-ki, who was adamantly against demands from both the ruling Democratic Party and the opposition United Future Party to create a fourth supplementary budget, hinted that he may relent if the current social distancing measures are raised to a complete lockdown.

“A fourth supplementary budget will be determined on the number of confirmed patients and whether the social distancing level will be raised,” Hong said.