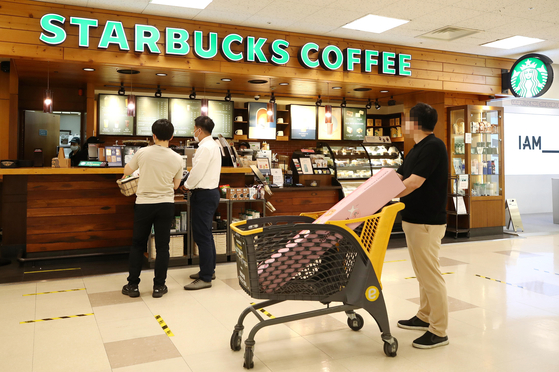 A Starbucks store in Seoul in July. The 250,000 won grant to almost all Korean will not be allowed to be used at the global coffee shop. [YONHAP]

Almost all Koreans are getting 250,000 won ($215) from the government in so-called emergency relief grants.

But they won't be allowed to spend any of it on luxury goods, in big supermarkets or at foreign retailers like IKEA -- or even for a Starbucks Frappuccino .

According to a government task force on the emergency relief grants on Thursday, stricter rules will be applied compared to the last such grants distributed in May 2020. This round is specifically meant to help small independently owned stores and businesses.

The grants cannot be used:
--  At supermarkets and other retail stores run by conglomerates such as Emart’s No Brand.
-- At outlets of chicken, bakery and coffee chains run directly by franchise companies. They can be used at outlets run by franchisees.
-- For luxury branded goods sold in any venue.
-- At Ikea stores and Starbucks branches.
-- For Apple products sold anywhere.

They can be used in convenience stores and for food delivery services.

Some restrictions were put on the grants given in May 2020, but that money could be used at Starbucks in Seoul, Ikea, for Apple products from Apple stores or on luxury goods, and that generated controversy.

Some argued that allowing purchases of goods from big global companies undermined the purpose of the grants, which was to help small independently run businesses.

The National Assembly last month passed a 34.9-trillion-won ($30 billion) supplementary budget that included emergency relief grants for every single Korean except the wealthiest, those in the top 12 percent income brackets.

The total budget for the emergency relief grants is 11 trillion won.

The government estimates a total of 44.7 million people will receive the grants.

Except for the top 12 percent wealthiest, each Korea will receive 250,000 won.

This time the grants are going to individuals rather than households.

Finance Minister Hong Nam-ki said Thursday that the government hopes to distribute 90 percent of the grants by the end of September to boost the domestic economy ahead of the Chuseok holidays, when exchanges of gifts between family and friends are common.

There have been growing concerns over the impact of the fourth wave of Covid-19 infections on the economy.

“Exports in the first 10 days of this month increased 46.4 percent [year-on-year] while there were 542,000 people with jobs [compared to a year ago] in July and credit card spending continues to grow, which shows that while still limited, [economic] recovery is continuing,” Finance Minister Hong said Thursday during a government meeting. “However, it seems inevitable that the impact of the Covid-19 fourth wave will start showing this month.”

“As I have said more than once, swift support is desperately needed,” Hong said.