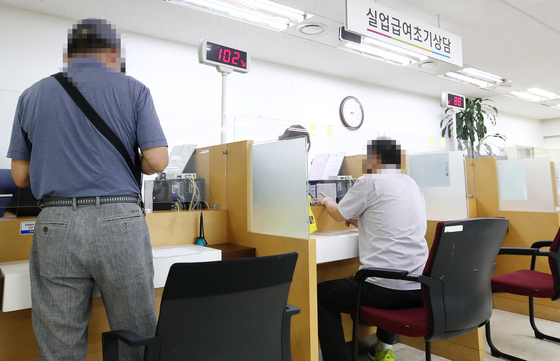 People apply for unemployment benefits at the Labor Ministry's branch office in Seoul on Sept. 1. [YONHAP]


More than 1 trillion won ($843 million) of unemployment benefits were paid out in August. It was the fourth consecutive month in which the government disbursements to those out of work exceeded that amount, though the total was slightly less than the record set in July.

According to the Labor Ministry on Monday, 1.09 trillion won in unemployment benefits were paid in August. That compares with the 1.19 trillion won a month earlier.

The number of people subscribing to the employment insurance program in August was 10.42 million, which is 262,000 more than a year ago. Subscriber numbers have been increasing on year since May.

The number of subscribers in manufacturing has been declining on year every month since last September.

Declines in subscriber numbers were greatest in the electronics and telecommunications and automotive categories.

In August, 128,000 fewer electronics and telecommunications workers subscribed to the insurance, and 107,000 fewer automotive workers.

Online shopping and other retail businesses benefited as social distancing resulted in a need for more workers.

Fewer young people are subscribing, while more older people are signing up as the number of government jobs for the elderly have been increased.

The government expects the unemployment situation to worsen this month as the impact of the resurgence is likely to be felt in September.