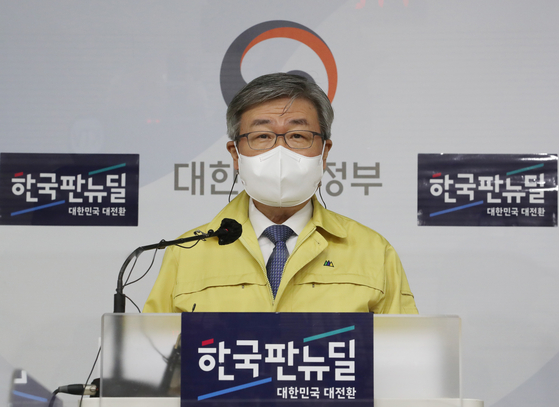 Employment and Labor Minister Lee Jae-kap announces plan on essential workers at the government complex in Seoul on Dec. 14. [YONHAP]


The government will distribute 500,000 won ($460) to in-home caregivers and after-school activity teachers in the first half of next year to help them during the Covid-19 pandemic.

The Ministry of Employment and Labor on Monday estimated that around 90,000 people will get the payments.

“Caregivers, many of which are older women, and after-school teachers, most of whom are freelancers, have been performing key roles during the Covid-19 crisis situation,” Labor Minister Lee Jae-kap said in a press briefing on Monday.

“Yet they are faced with the difficult situation of their safety and livelihoods not being guaranteed. They are exposed to infection and have unstable incomes due to canceling of classes.”

In Korea, people who take care of the elderly, people with disabilities and young children at home are known as dolbom workers, which roughly translates to caregivers.

After-school teachers are freelancers who run extracurricular activities after schools such as computer coding classes and music lesson.

The first payments are expected in February because it will take at least a month to set up the system.

Applicants will have to prove that they worked in their industry for at least a year. Additionally, their incomes will dictate how much they are are eligible for.

According to the government, the average monthly wage of in-home caregivers is 1 million won to 1.4 million won. Caregivers in institutions make 2.7 million won.

Because of Covid-19, some caregivers have lost their contracts, and schools have stopped after-school programs.

In addition, the government said it would offer special health examinations for cardiovascular or respiratory disease to delivery service workers and people working in sanitation.

The examinations will be paid for by the government.

The government will also expand its supplies of personal protective gear including face masks for essential workers, particularly sanitation workers.

The government classified delivery and sanitation workers as essential on Monday.

Parcel deliveries surged 20 percent year-on-year as of July with the increase of people working from home to avoid being infected. There has also been an increase in garbage being disposed of.

Daily Covid-19 cases peaked at over 1,000 on Saturday, an all-time record. While the number of cases on Sunday fell to 718, experts say it could rise again.