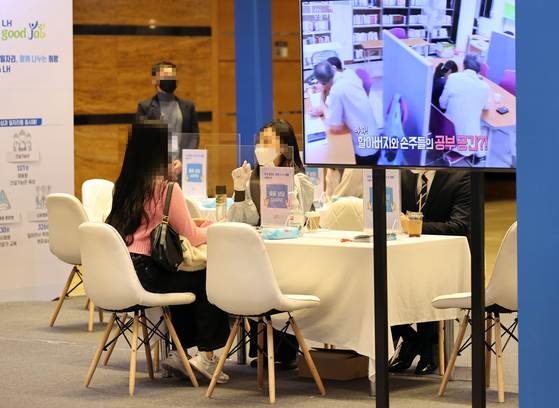 A job applicant gets advice at a booth at a job fair held at Coex in Gangnam District, southern Seoul, on Tuesday. [YONHAP]


Job losses hit a six-month high in October as social distancing regulations kept people at home and away from work and businesses.

The government eased its social distancing regulations on Oct. 12.

In October, the number employed dropped 421,000 on year. That is the biggest drop since April, when 476,000 positions vanished on year.

The job market has been contracting year-on-year for eight months. This hasn’t happened since 2009.

The number of people working in restaurants and hotels fell 227,000 on year, down 9.9 percent. In wholesale and retail, the number of positions were down 188,000 people, a 5.2 percent decline.

This is the biggest decline in manufacturing employment this year since the pandemic started, and it is the largest drop since 111,000 jobs were lost in September 2019.

While the number of regular employees last month increased 14,000 compared to a year ago, the number of contract worker positions shrunk 261,000. Day-to-day hires shrunk 59,000.

The number of self-employed businesses where the owners work alone increased 90,000 year-on-year. But those with employees shrunk 168,000.

The only age group in which jobs were added was the 60-and-over category. Last month, 375,000 jobs were created for the elderly. The rest declined compared to a year ago.

One of the biggest concerns is the increasing number of young unemployed people.

Last month, an additional 164,000 people were unemployed compared to the same period a year ago. The total number of unemployed last month came to 1.02 million.

The statistics agency said an increasing number of young people have fallen into the unemployed category, including those in their 20s, 30s and 40s.

“We are still in a difficult situation as the number of people employed in October has seen a slightly larger decline than in September,” Hong posted on Facebook. “The government is taking seriously that the difficult job situation due to Covid-19 is continuing for eight consecutive months.”

He vowed that the government will continue to push to stabilize the job market and expressed confidence in the economic recovery.

“We will further push our efforts in improving the domestic market and exports so that the recent improvement in the economy would swiftly lead to the recovery of the job market,” Hong said.