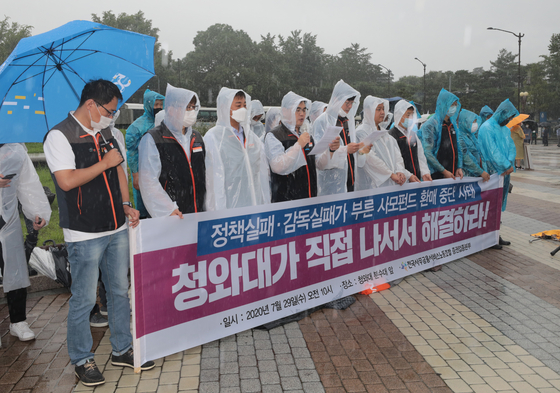 Korea Finance & Service Workers' Union members protest against the government's lax regulations of investments in front of the Blue House in July. [NEWS1]


Hundreds of billions of won of customer money has been frozen by two funds, the latest in a series of such suspensions that have left trillions locked up and possibly lost.

Kiwoom Asset Management Tuesday told securities companies selling its funds that it would be unable to immediately return 360 billion won ($303 million) in customer money invested in the Kiwoom Global Alternative Fund. VI Investment Corporation earlier this month announced that 100 billion won could not be returned from its VI H2O Multibond.

The suspended products are funds of funds, which pool money from investors and then use that money to buy shares in existing funds. They both got into trouble by investing in French-domiciled funds from Britain's H2O Asset Management.

Because of the ownership of illiquid private securities, H20 was ordered by French regulators to segregate bad assets from the good. H20 subsequently froze eight funds.

The biggest seller of the Kiwoom funds was Kookmin Bank, which marketed 37.5 percent of the total. Other sellers include Samsung Securities, Shinhan Bank, the Industrial Bank of Korea and Woori Bank. In the case of VI, the funds were only sold to institutional investors.

Kiwoom and VI argue their situation is different from the troubles faced by Optimus and Lime.

“We decided to suspend repayment of the funds temporarily as it's difficult to assess its actual value while H2O is in the process of separating the illiquid assets from others. Kiwoom is in constant communication with the British H2O. Fortunately, the firm included the illiquid assets in its original valuation of the funds,” said Lee Chang-jin, a spokesperson from Kiwoom Asset Management.

Other Korean funds may have employed the same structure and could suffer the same fate due to illiquid foreign assets.

Kyobo Securities early this month delayed the redemption of 10.5 billion won worth of private equity funds frozen six months ago. The fund invests in accounts payable of small and medium-sized U.S businesses and is operated by Hong Kong-based Tandem Investment Advisors.

According to the Korea Financial Investment Association, a total of 36 trillion won is invested in fund-of-fund products investing in overseas products.