Stocks rise for second session on hopes for ECB

Stocks rise for second session on hopes for ECB 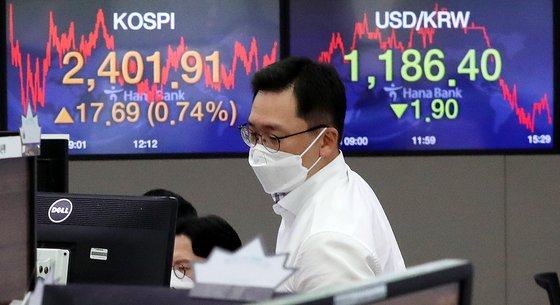 A screen shows the closing stats for the Kospi in a trading room at Hana Bank in Jung District, central Seoul, Tuesday. [NEWS1]


Stocks gained for a second consecutive session on Tuesday as investors pin hopes on the possibility that the European Central Bank (ECB) may signal further easing moves in an upcoming monetary policy meeting. The won rose against the dollar.

The index closed above the 2,400-point mark as chipmakers continued to gain despite lingering valuation pressure on tech shares in major economies.

The local currency closed at 1,186.4 won per dollar, down 1.9 won from the previous session's close.